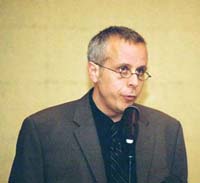 From talking penguins to bright-eyed parodies of prominent political figures, you can always rely on alternative political cartoonist Tom Tomorrow for a twisted take on any current event. And that’s especially evident in his new collection of comics, Hell in a Handbasket, in which he chronicles the entire Iraq War through his weekly strip, “This Modern World.”

Take his depiction of the recent boom of right wing bloggers. The strip begins with a large man posting pro-war messages on his blog. When an e-mail asks him why he doesn’t enlist if he’s so supportive of the military, he’s hit with carpal tunnel syndrome, desperately shouting “Ma, do we have any more Cheetos?”

The cartoon wasn’t particularly popular with conservative bloggers, but then again that’s not the point.

“Right wing blogs used to write about their contribution to the war, which was, I guess, typing,” Don Perkins, the man behind Tom Tomorrow, explained at a book reading at The Booksmith on Haight St. “Literally every right wing blogger in the world spent the rest of the week writing about how they’re not, you know, fat.”

The reading was a homecoming of sorts for Perkins, who worked as a postcard, T-shirt, and window designer at The Booksmith before “This Modern World” debuted in SF Weekly in 1990. Now the strip appears in over 150 newspapers throughout the country and on several websites.

“It holds up pretty well in retrospect,” he remarked. For example, in one panel published around the battle of Baghdad, Dick Cheney quips “Let’s skip to the quagmire!” in anticipation of a long stay in Iraq. In fact, though his art may be farcical, Perkins said he merely puts on paper what many Americans are thinking.

“There were millions of people in the streets protesting the war, but no one listened to us,” he explained. “It’s really amazing how quickly it went from sugar to shit and so obvious.”

Not all of his humor is so heavy. In one cartoon not in the book that Perkins showed at the reading, Cheney and Bush hold a secret meeting of radicals in 1969 in which they decide to infiltrate the Republican Party and drive it into the ground. However, despite their best efforts, including a lengthy war and crackdown on civil liberties, they can’t get G.O.P. popularity to drop. They finally resort to the “nooclyar option.” “We didn’t really need Iowa,” quips a newscaster.