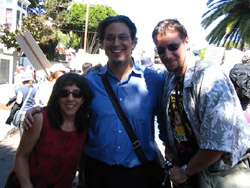 Even in the politically correct Bay Area, it’s hard to convince people to give up their cars, but San Francisco environmental activist Sue Vaughan is intent on turning the tide of American gas consumption.

“I like challenges and it’s a huge challenge,” she says.

Vaughan says that the show focuses on encouraging the development of sustainable lifestyles in the United States, a tall order in a country that stakes its identity on the infinite availability of space and resources.

“People have this idea that the American dream is a home in the suburbs with a lawn and a two-car garage,” she says. “I call that the ‘American delusion’ because it cannot be perpetuated.”

As the world’s oil supply dwindles and the effects of global warming due to oil consumption become clearer, Vaughan says that Americans must begin to envision a lifestyle without cars. A first step is to create “livable cities” where residents can easily commute without consuming gas. Vaughan’s doing her part—she gets around on a twenty-year-old bike—but she says that San Francisco could improve its public transit system.

“The problem is that it’s concentrated in the Downtown section of the city and the Richmond,” she says. “It abandons the Sunset and Bayview/Hunter’s Point. What transportation there is concentrated on getting people Downtown.”

Other issues include the scarcity of necessary businesses, such as supermarkets, in many neighborhoods and the long commutes of many Bay Area workers.

But as difficult as it may be to imagine, Vaughan says that Americans will begin to shift their lifestyles when their dependence on cars begins to hurt their pocketbooks, a process that began with the recent rise in gas prices.

“I was in a classroom today talking to middle school students about peak oil,” she says. “I told them, you’ll probably get your driver’s license, but it’s becoming more and more unlikely that you’ll own your own car. It’s going to become prohibitively expensive.”