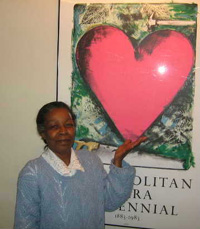 After sixteen years of activism in San Francisco schools and her downtown neighborhood, Daisy MacArthur probably shouldn’t have been surprised when she found out two weeks ago that Supervisor Aaron Peskin had nominated her for a commendation. But perhaps it says something about to her character that she was. “I was flabbergasted,” she says.

The woman who the residents and merchants of Bush Street know as “Ms. Daisy” will accept the honor at Tuesday afternoon’s Board of Supervisor’s meeting at City Hall for selflessly working on behalf of her neighbors, who look to her as a problem solver who will never give up on their behalf. “If there’s a problem they come and talk to me about it and I go see what I can do,” MacArthur says.

“The challenge is just getting people to sit down and listen to what’s going on in the city and in their neighborhoods,” she says.

There are very few problems that she hasn’t stared down. When a dying mother asked MacArthur to take care of her elderly son, Ms. Daisy gave him all of his meals up until he died. When her neighborhood demanded that its local elementary school be retrofitted, she was instrumental in getting the new Betsy Carmichael built. She adopted a local homeless man as the “mayor of Sutter Street,” bringing him food and love daily and ultimately orchestrating a funeral when he died without family.

But perhaps the most difficult battle of all has come over something much more dear to MacArthur than the politics of San Francisco schools or the plight of the downtown’s homeless: her own home.

She had grown to regard her neighbors at 901 Bush Street as her family.

“We looked after each other,” she says. “We would spend Christmas and Easter together. I lived on the first floor. I loved to cook. They would all come down for Thanksgiving dinner.”

Their saga began a decade ago when MacArthur organized these neighbors to combat the neglect of the building’s owner.

“We had various problems: plumbing problems and heat problems,” MacArthur says. “The inspectors would come out and they would take to the management and send them letters but they weren’t fixing anything.”

The tensions came to a head on January 3, 1999, when the apartment building that she shared with thirty-seven other residents burned down in the middle of the night.

“I’m the type of person that can kind of feel that things are wrong the day before,” she says. “I went to church and prayed and then I went to the store and bought more clothes and I couldn’t understand why I was doing all that. I just couldn’t rest that night.”

Despite her unease, MacArthur was sound asleep at four a.m. when her neighbor frantically knocked on her door to tell her that the building was on fire. She grabbed her wallet, her nephew, and the elderly man next door and went across the street to the apartment of a friend.

“We watched the building literally burn,” she said.

Their bad luck didn’t end there. Through a merchant she had befriended at her nephew’s school bus stop, MacArthur secured temporary shelter for herself and her neighbors at the Canterbury Hotel. On January 14, they returned to the building to see which of their possessions survived the fire.

“As we were walking up Sutter, we looked up and the building was on fire again,” she says.

This second fire would displace the building’s residents for good. Both fires were blamed on electrical problems for which the owner was not held responsible. For five years, the building lay dormant as its previous owners tried to sell it, but MacArthur didn’t forget about her apartment. She and many of her neighbors stayed in the area, even though it was difficult to find an affordable apartment in San Francisco during the dotcom boom.

“We had to walk in the rain. We tried to be upbeat. We didn’t want to move out of town. We wanted to be together like we were,” she says.

And so she and her “family” of neighbors eagerly awaited the retrofit of their old apartments so that they could return.

“I would walk back and forth and see the rain coming in,” she says. “In 2004 someone bought the building. But it didn’t add up to me because it was a historic site built in 1901. They were doing things to the building that they weren’t supposed to do. So I dug deep.”

The deeper she dug, the more troubled she became.

“They were permits that had been issued that should not have been issued. I started talking to all of the supervisors,” she says.

When the building’s new owner, M-J SF Investments, got wind of her inquiries, they tried to quiet her by offering her apartment back at below market rate. She refused. When they set up a meeting, she brought all thirty eight former tenants.

“He was in such awe because after five years you wouldn’t think that anyone would still be interested,” she says. “But I’ve been sitting here watching my home waiting patiently.”

The intentions of the new owner soon became clear last year when M-J SF attempted to convert the building into condominiums. Only a battle at the Board of Supervisors led by MacArthur thwarted that plan. Earlier this month, M-J SF announced that it would invoke the Ellis Act to convert the improved building into tenancies in common.

The move would be the largest eviction ever in San Francisco and devastate MacArthur and her family. But she’s confident that just like every other problem that’s come her way in the last fifteen years, she can deal with this one.

“He has a fight on his hands,” she says. “I am very positive because not only am I being evicted, but there are so many people out there in the same situation. We are not going to give up.”