Beyond Chron Political Predictions for 2012 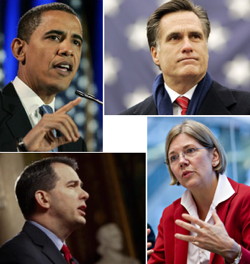 Although voters are showing remarkable volatility, my crystal ball for 2012 is surprisingly clear. One reason is that 2012 is the every four-year election cycle when young people vote. Another is that predicting the Republican presidential nominee has become easier with the successive downfalls of Tea Party-backed challengers to Mitt Romney. Republicans will not follow the precedent of Delaware voters in the 2010 Republican Senate primary, who chose Tea-Partier Christine O’Donnell over “moderate” Congressman Mike Castle, but will instead nominate Romney, a candidate in the mold of George H.W. Bush, Bob Dole and John McCain. Barack Obama looks surprisingly strongly positioned to defeat Romney, contrary to what I thought even one month ago. Elizabeth Warren’s Senate race in Massachusetts, Democrats efforts to retake the House and maintain control of the Senate, the recall election of Wisconsin Governor Scott Walker, California’s tax increase initiatives, Bay Area elections for State Senate and Assembly and what 2012 holds for Oakland Mayor Quan and San Francisco Mayor Lee are all on the table. Here’s how we see electoral politics in the coming year.

Regardless of what happens in Iowa, Republicans will nominate Mitt Romney as their presidential candidate. Tea Party forces failed to find a unifying candidate to challenge Romney, and it became clear in the past two weeks that Newt Gingrich is too distrusted by fellow conservatives to ever play this role.

Did the Tea Party storm Congressional “Town Halls” in August 2009, help win back the House in November 2010, and win two key budget fights with the President in December 2010 and August 2011 so they could nominate Mitt Romney as President? Does that not seem like a mammoth abandonment of principle from a constituency that claims to detest political expediency?

What else is new. Tea Partiers and social conservatives figure that if they can get Romney elected he will have no choice but to do their bidding. And Rick Perry, who I and many others (including Nate Silver of 538.com) originally saw as the consensus conservative who could beat Romney, has repeatedly proved himself unfit for the national stage (and don’t we miss what Molly Ivins would be saying about him!).

On August 26, 2011 I wrote an article, “Why Romney Would Defeat Obama in 2012.” I saw Romney as sufficiently bland to make the race a referendum on Obama, which the President cannot win.

But having seen Romney in action the past months, he is one strange guy. We knew the story about him strapping his dog on the roof of his car when he drove to Canada, but that’s just the tip of the iceberg. He’s got the $10,000 debate bet, the flip-flopping on health care, abortion rights and almost every major policy issue, and his having made his fortune by downsizing companies and laying off workers.

Contrary to what many still believe, Republicans have a problem winning presidential elections. It’s often forgotten that Al Gore beat George W. Bush in 2000 by 500,000 votes and won the electoral vote before Florida officials and the U.S. Supreme Court stole it from him. And Bush only won in 2004 due to fears of terrorism sparked by 9/11; the last clean Republican victory was in 1988, when Dukakis’ poor campaign rather than voters favoring Republicans on the issues swung the election.

Bush in 2000 was a far stronger candidate than Romney will be, and Gore was not in the same league of Barack Obama as a campaigner. Yes the economy was better in 2000, but
unlike Bush in 2000, Romney is not the candidate voters would choose to sit next to on an airplane flight.

Romney reminds me of Richard Nixon in that he is visibly uncomfortable dealing with people. Nixon, however, was not running in an era where voters could constantly see his lack of charisma on the Internet. Romney is closer in personality to losing Republicans Dole and McCain than to George W. Bush.

In my earlier piece I noted that no Republican had first won a presidential election from a small state since Indiana’s Benjamin Harrison in 1888. Romney can claim to be from Massachusetts and Utah, neither of which satisfies the GOP’s large state requirement for victory.

I see Obama winning in a race not as close as it now appears.

Its approval numbers are in single-digits, but Republicans would have to lose 25 GOP seats in an election where many of the districts that switched to Republican in 2010 will likely support Romney over Obama. Polls have found a dozen Republicans to be vulnerable, and a 2008-like tidal wave could shift more than 25 seats. I estimate there is a 40% chance this could occur, but the odds are against it.

Many see Republicans taking control of the Senate by picking up the four seats they need from Nebraska, South Dakota, Missouri, Montana, Virginia, and potentially Hawaii. But Elizabeth Warren’s victory over Republican Scott Brown in Massachusetts raises the bar. Obama will help Tim Kaine beat George Allen in Virginia. And Jon Tester’s Republican opponent in Montana, Congressmember Denny Rehberg, may be too overtly controlled by the mining industry even for that state, so this race could go either way.

Assuming Missouri Senator Claire McCaskill is likely a goner, that still likely leaves the GOP one seat short of their goal. Republicans have a better chance of winning the Senate than Democrats have of retaking the House.

The Fall of Scott Walker

Wisconsin will recall Governor Scott Walker for the simple reason that he has behaved like an arrogant jerk. Wisconsin’s electorate in 2012 will be less conservative than when Walker was elected in 2010. The Governor’s aggressive attacks on public employees have alienated voters in a state with a long tradition of cooperation and fairness, and he will be ousted.

Jerry Brown’s measure is a sure winner; the question is whether any of the other tax raising initiatives will also prevail. Two have a chance of winning: the “millionaire’s tax” backed by the Courage Campaign, California Federation of Teachers and many community groups, and Molly Munger’s broad income tax hike that fuels $10 billion to k-12 and pre-kindergarten programs.

Of the two, Munger’s measure has the advantage of campaign funding from her billionaire father. The millionaire’s tax is the most progressive measure, polls the best, and provides aid where to higher education where its desperately needed, but the question is whether backers can raise the funds necessary to offset a major opposition campaign waged by… millionaires, of course!

I predict one of these two join Brown’s measure in the winner’s circle. I also see the initiative to reform the state’s costly three strikes law also prevailing.

Loni Hancock will defeat a primary challenge from Assemblymember Sandre Swanson for her Berkeley-Oakland State Senate seat. June will not be a high turnout election, and Hancock’s voters remain loyal to her.

Oakland Mayor Jean Quan will either avoid a recall election, or defeating a recall if it qualifies for the ballot. The Alameda County Labor Council has come out against the recall, calling Quan a longtime ally. No way she is recalled with such support.

In San Francisco, District Four Supervisor Carmen Chu has not announced she is running for the Assembly seat to be vacated by Fiona Ma, but sources say she is seriously considering the race. I believe she will run, and that she wins in a landslide.

San Francisco Mayor Ed Lee will retain high approval numbers throughout 2012. Lee’s popularity has defied skeptics by remaining high after announcing his candidacy, and all through Election Day despite his being pounded by multiple candidates and media outlets. Voters clearly like a low-key mayor with no ego-driven agenda who they believe is trying to do his best for the city.

Lee has another advantage in 2012: many San Franciscans will be far more focused on the presidential race than on local politics. When San Franciscans see the Tea Party potentially controlling all three branches of government, a delayed MUNI train or questions about the America’s Cup seem far less critical.