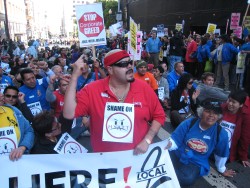 On Thursday, September 30, I was fired from my job at the Hotel Frank. I have worked as a bellman at this small, boutique hotel for nearly 12 years. Hotel Frank, along with the Hotel Metropolis, was sold in a foreclosure sale last May. Wells Fargo, through a corporate intermediary known as a “special servicer,” assumed control. They put a vicious anti-Union hotel management company, Provenance, in charge. Provenance has been waging a nasty campaign designed to gut our Union contract, which was covered in a recent Bay Guardian article.

The very next day, management reacted by firing me. This was nothing more than the hotel’s panicked retaliation for our stepped-up boycott action. They mistakenly believe that if they fire our Union leaders, other workers will be scared into submission. They are very, very wrong.

The Hotel’s excuse for firing me is that, after almost twelve years on the job, I just don’t know how to be a good bellman. This is ridiculous.

Wells Fargo and Provenance won’t get rid of me this easy. The UNITE HERE Local 2 leadership is solidly behind our campaign to win back our contract, and to put me and anyone else they fire back to work.

The Hotel Frank and the Hotel Metropolis are small hotels, but we are part of a big Union.

Please join me and other hotel workers at a UNITE HERE Local 2 Picket Line and Rally at the Hotel Frank tomorrow:

Picket Line and Rally at Hotel Frank
386 Geary (at Mason)

NO JUSTICE! NO PEACE!
Bring noisemakers!

Thank you for your support.

Marc Norton has been writing guest columns at Beyond Chron for years, covering topics such as hotel workers’ rights and JROTC.