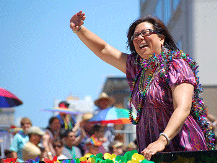 Betty Yee, who has developed a reputation as an honest and effective numbers-cruncher at the state tax board, delivered a stinging rebuke of her party Sunday, saying that California Democrats have become disconnected from their core values.

“Democrats, we are just as guilty of getting sucked into the influence of money and power about which we criticize Republicans,” Yee, a member of State Board of Equalization, said in the most honest and memorable speech of this weekend’s annual state party convention. ”It is time we have politics shaped by our values, rather than our values shaped by politics. If not, I believe Democrats will continue to lose ground with respect to the electorate.”

The blunt criticism of some in her party came less than twelve hours after she successfully blocked the party from endorsing in a closely-contested race for state Controller. The “no endorsement” vote was considered a major blow to her Democratic rival, Speaker of the Assembly John Perez, who wields substantial power and influence over delegate appointments.

With an army of campaign aides, Perez countermanded a request by California Democratic Party Chairman John Burton that statewide candidates not seek the party’s endorsement. Perez, who has been endorsed by all but six of his Democratic colleagues in the Assembly, made a major push for the party’s endorsement. He had a substantial advantage in delegate appointments. Members of the State Assembly, according to the state party bylaws, are entitled to make five appointments to the state party.

Yet, many convention delegates defied the orders of their appointing authority and openly backed Yee, who received 45 percent of the vote– just three percent less than the current Assembly Speaker. Under party rules, all delegate votes are public in order to make delegates more accountable to their appointing official or committee. Following the vote, any member can review ballots, meaning some delegates backed Yee in the face of political retribution.

Perez spokesman Doug Herman said that the speaker promises not to take any action against delegates who defied their appointing authority in the endorsement vote.

Saturday’s no-endorsement vote, coupled with Yee’s rousing Sunday morning speech, exposed a simmering feud within the California Democratic Party between its principled idealists and power-players. Yee’s examples of how the party has lost its way were thinly-veiled criticisms of Perez’s tenure as speaker.

“We as Democrats decry bullying and voter suppression tactics to silence the vulnerable among us,” Yee said. “Yet, within our party, similar tactics keep delegates and club members in line so power remain in the hands of a few political leaders.”

In addition to the potential retaliation against delegates who backed her in the endorsement vote, Yee was alluding to Perez’s retaliation against former Assemblyman Anthony Portantino. In 2011, after Portantino opposed the state budget, Perez retaliated by slashing his office budget, while also threatening to furlough Portantino’s government staff.

“There is no question that this is a punitive action because of my votes,” Portantino told the Sacramento Bee at the time. “Every member of the Legislature ought to have the right to vote their conscience.”

In another shot at Perez’s record on women’s rights, Yee said, ”We as Democrats regard women’s rights as paramount, yet within our party, women are being manipulated are being setup against one another, such that further advances towards pay equity and parity in representation continue to elude us.”

Last year, an analysis of payroll records found that female employees of the California State Assembly face a glass ceiling, substantial pay inequities and limits to their career advancement. Under Perez’s tenure, women have been paid less than their male counterparts, are less likely to serve in leadership roles and remain stuck in secretarial positions. The 10 highest-paid employees of the state Assembly, as of last year, were all men, according to state payroll records for the period ending on May 31, 2013.

“We as Democrats demand the highest levels of transparency and accountability in our government, yet within our party, we see PACs erode our very own Democratic values and for which we are unable to follow the money.”

In the final three weeks of the 2012 election cycle, Democrat campaign committees transferred more than a quarter-million dollars in special interest campaign contributions to help bolster the campaign of Sharon Quirk-Silva, who helped secure Democrats two-thirds majority in the Assembly.

Perez has also personally enjoyed the perks of elected office. According to state disclosure reports released earlier this month, Perez accepted nearly $38,000 in gifts and travel payments last year. A report released last December by California Common Cause ranked Perez as the second biggest recipient of gifts in 2012.

Even traditional Democratic allies have publicly criticized Perez for his fundraising prowess.

“John Pérez has let the money flow into his and other legislators’ campaign coffers,” wrote Patricia Bellasalma, president of the California National Organization for Women, in a February article at L.A. Progressive that has been widely-circulated among party activists. “The results have not been good for California’s women and children, for workers, nor for California’s economy, especially if you measure a thriving economy by the number of good-paying middle class jobs.”

Yee closed her convention speech by asking her fellow Democrats to embrace redefined values and leaders who ask: “‘What can I do for you?’ rather than, “What have you done for me lately?’”

From Sacramento to San Diego, delegates expressed support for Yee’s message on Twitter.

This piece first appeared in CalNewsroom.com