Better Neighborhoods Plus Continued Until January

by Alison Stevens Rodrigues on December 14, 2005 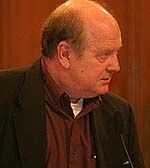 In an 8 to 3 vote, the Board of Supervisors agreed yesterday to continue Sup. Jake McGoldrick’s Better Neighborhood Plus (BNP) legislation until Jan. 17, 2006. While BNP is meant to mandate community-based planning, Sup. Ross Mirkarimi expressed doubts that it will – at least in his district. “This is not about putting up any buildings, this is not about tearing down any buildings,” said McGoldrick. “This is about one thing – process.”


He said it will save at least two years (and cut costs) on big development projects because it will move forward environmental review. The process already applies, in part, to existing projects in the Market and Octavia, Central Waterfront, and Lower Potrero Hill/Showplace Square areas and simply is called, Better Neighborhoods.

The incorporation of such benefits could be anything from improvement of a single sidewalk to the greening of an entire neighborhood, said McGoldrick, which is why he wanted the legislation to pass sooner rather than later.

There’s a need to move forward now because of those areas where planning is underway. They need to be able to create parameters for public benefits, McGoldrick said.

Still, Mirkarimi requested a continuance until after the holiday break so that community groups in his District 5 could get better informed about the proposed process.

“Not all neighborhoods are created with parity,” said Mirkarimi. “And not all conduct themselves in their ability to lobby or advocate on behalf of their needs with parity.”

Of particular concern for Mirkarimi is the Western Addition area of the city. While the BNP legislation outlines a boundary differential that moves east and west, from Franklin and Masonic streets, it does not give a northern or southern compass as to where those boundaries end.

Thusly, it mirrors the Western Addition A-2 Project Area, under which the Redevelopment Agency has authority until Jan. 2009. And residents there are looking forward to and preparing for an exit of redevelopment, Mirkarimi said.

“But any decisions as to what a neighborhood would look like is open to discussion and community members will be stakeholders in this,” said McGoldrick.

He insisted that BNP is not about bureaucrats or politicians imposing solutions, rather, it’s about communities going to various agencies and telling them what they want. He added that in 2009, once the Western Addition falls out of the Redevelopment Agency’s control, unless community groups and stakeholders decide they wanted something there, the city’s zoning maps for that area would spring into action.

“It’s all about involvement in decision-making from the ground up,” McGoldrick said.

That’s when Mirkarimi questioned whether members of the Planning Department or the Redevelopment Agency had outreached to any Western Addition community groups. Amit Gosh, with the San Francisco Planning Department, said that he could not name specific community groups and Morales said the Redevelopment Agency had not yet been involved in the process.
To this, Mirkarimi reaffirmed his request that the legislation be continued until proper outreach had been initiated, and he rejected McGoldrick’s argument that BNP legislation needed to pass before the outreach process could begin.

Sup. Fiona Ma too requested a continuance because, she said, the Planning Commission did not vote to move the item forward but instead requested that a pilot program be initiated so that the BNP’s results could be assessed.

McGoldrick pointed out that such a pilot had been added to the legislation in the form of the Inner Geary Planning Area. But he conceded that after having worked on BNP for three years, waiting another month would not cause irreparable damage.