Betsy DeVos: A Radical Destroying The Cornerstone of America 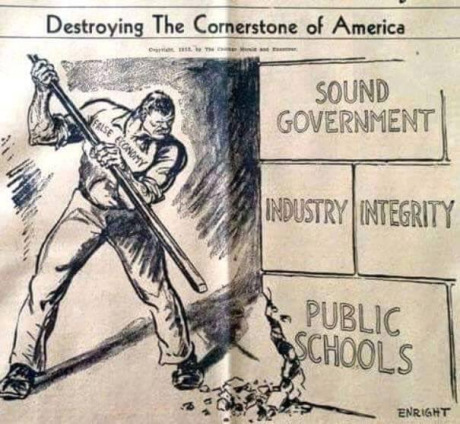 The U.S. Senate Health, Education, Labor, and Pensions Committee will consider the nomination of Betsy DeVos as U.S. Secretary of Education. DeVos and her family have devoted many millions of dollars to destroying public schools and turning the clock back by more than a century. She wants the government to pay tuition at religious schools, voucher schools, for-profit schools, any alternative to public schools is her goal.

American public education is one of the essential institutions of our democratic society. The guarantee to everyone in this country that they could attend a free public school was a hard-fought victory.

First, it required persuading the public to tax themselves to pay for schools for the children of the community.

Second, it required separating the schools from religious institutions, which had long been the source of education.

None of of these changes came easily.

And the struggle to provide good schools is ongoing, since so many states base school funding on property taxes, which privileges those who are already advantaged.

DeVos is ignorant of the history of public education in America and the role of public schools in our society. Her hostility to public schools should disqualify her from consideration for this position.

This piece previously appeared in the Diane Ravitch Blog