Bet on Barbara Boxer in November 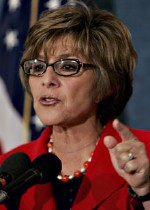 Gambling on political races is illegal in California, but if you find yourself in Las Vegas and are looking for a surefire (legal) bet, consider putting some cash on California Senator Barbara Boxer winning re-election in November. The odds could be quite good. After all, the election year drumbeat that Boxer is in trouble has already begun, with even the March 2 New York Times declaring in a headline story that “early polls” show that Boxer is “showing signs of vulnerability.” The article never identifies these polls, but they are probably the same ones that had Boxer on the ropes against Matt Fong in 1998 (she won by 10%) and on life support against “moderate” Bill Jones in 2004 (she won by 20%). A traditional media that reveres corporate-owned “centrists” like John McCain and Evan Bayh has trouble understanding why an outspoken progressive like Boxer keeps piling up big election wins — and will do so again this fall.

If it’s early in a Barbara Boxer re-election year, then you can count on stories arguing that the popular incumbent is in “trouble.” Those who argue that the United States is a “center right country” have difficulty accepting that Boxer is popular precisely because she has not betrayed her progressive principles.

Boxer Maintains Her Base

The Democrats likely to face troubles this fall are those that have generated little enthusiasm, if not outright hostility, from the Party’s core base. In contrast, Barbara Boxer retains the strong loyalty of environmentalists, labor unions, women, Latinos, and the other key Democratic constituencies.

While the New York Times states that the California G.O.P. “Smells Democratic Blood,” these same feelings were expressed in the 2000, 2004, and 2008 presidential races, and in virtually every recent statewide election that has seen California Republican candidates fail miserably. Republican Governor Schwarzenegger’s approval ratings are lower than that of former President George W. Bush, which shows that as unpopular as Democrats are in the state, Republicans are less so.

Boxer’s base will be highly motivated to keep her in office, and she will wage the type of spirited campaigns that she has conducted since winning a seat on the Marin County Board of Supervisors in 1976. I met Boxer during her 1982 congressional primary campaign, and she was a bundle of energy then and remains so today.

As for Boxer’s age, she is younger than Jerry Brown, who will top the California Democratic ticket in November. And the two leading potential Republican opponents are both over 55, so age will not be a factor.

Boxer will so badly out-campaign Fiorina that they may have to stop the campaign prior to November and declare a technical knockout. I can just imagine all those independents rushing to back a candidate who got a huge buyout while laying off workers.

The media loves candidates like Campbell, who exhibited principles early in his career but to win higher political office has become a carbon-copy, anti-tax GOP corporate hack. Campbell thinks he can cut into Boxer’s support because he is pro-choice, but this means he will lose far more votes from Republican right-wingers who will sit out the race.

The media always promotes Republicans like Campbell or John McCain who are reactionary and corporate-owned on most issues but have a few stands that are common to Democrats. This makes them “mavericks,” and allegedly shows they can appeal to Democrats.

This might work if Boxer were a Blanche Lincoln Democrat. But she is a Democrat out of the Phil and John Burton school (she was once a congressional aide to John), and her record and campaign style will create a sharp distinction between herself and either of her opponents.

I like Boxer by 8% over Campbell, and double that over Fiorina. And if there is a Tea Party candidate in the race as well, Boxer’s victory margin could approach 2004 levels.