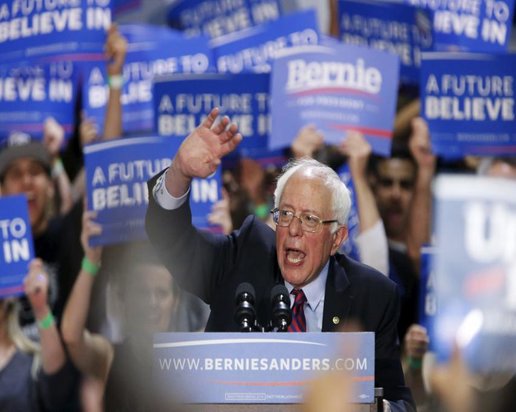 San Francisco progressives had local reasons to be thrilled over Bernie Sanders’ big victories on Saturday. Sanders’ wins ensures a strong California presence, which translates into a much larger voter turnout among the city’s young progressive voters.

The San Francisco DCCC is relevant for two reasons.

First, it makes endorsements. And in a heavily Democratic city, a candidate’s ability to secure the Democratic Party endorsement can spell the difference between victory and defeat. DCCC endorsements can also affect the outcome of ballot measures.

Second, DCCC candidates can collect unlimited campaign donations for their DCCC race that don’t count against the giving limits for other offices. Running for DCCC in June allows supervisor candidates to get huge donations from their top financial backers to build name recognition and support for their November campaigns.

San Francisco has a long running battle between “moderate” and “progressive” DCCC slates. The moderates, led by DCCC Chair Mary Jung, are currently in control. Progressives are mounting a major challenge to unseat them.

The SF Examiner recently bemoaned how many DCCC candidates already held elected office. But Paul Hogarth, who wrote a lot about the DCCC in the past, previously made this point in Beyond Chron in March 2012 (“DCCC Elections Still an Insiders Game”). Hogarth noted that six of the eleven supervisors were candidates for the DCCC, and that most of the candidates running can “win on sheer name recognition.”

I recall how this insider’s game happened.

Progressive strategists Aaron Peskin and Chris Daly realized during their tenures on the Board that the DCCC was more conservative than the electorate. As Hogarth described in March 2008, (“Supervisors Run for DCCC; Progressive Slate Formed”) they decided to try to take progressive control of the DCCC in 2008.

Daly and Peskin understood that winning progressive control of the DCCC required running candidates with high name recognition. This had the downside of consolidating more power in already influential politicians, but the upside was that the strategy worked.

The DCCC race will dominate San Francisco’s June election because many believe that the Democratic endorsement could decide whether “moderates” or “progressives” control the Board of Supervisors next January. While the SFDCCC cannot endorse in the biggest local November race— Scott Wiener won the California Democratic Party endorsement for  his State Senate race against Jane Kim, which binds the local party—how much money the DCCC puts into promoting that race will be impacted by which slate is in control.

My first experience getting deeply involved in the DCCC endorsement process was in 1992. In those days, Carole Migden ran the body with an iron hand. Nobody could raise money like Migden in her prime, which meant she sent out powerful and persuasive mailers backing the DCCC endorsements.

The power of the DCCC’s endorsement has declined since Migden’s heyday, but the Party’s endorsement in contested supervisor races in districts 1, 5, 9, and 11 could decide Board control in 2017.

I wrote in my political forecast for 2016 that “the D11 race between SEIU Local 1021 Political Director Kimberly Alvarenga and SEIU Local 87 consultant and neighborhood activist Ahsha Safai is the most competitive and perhaps the most interesting supervisor’s race of all.” Winning the DCCC endorsement could be decisive in this race.

If I have omitted someone from this slate, please let me know.

John Burton does not appear to be on either slate. This is likely because he does not need to be on a slate to win. John Burton  deserves a lifetime seat on the DCCC and his presence automatically enhances its stature.