Bernie Sanders: America’s #1 Socialist Makes His Move into the Mainstream 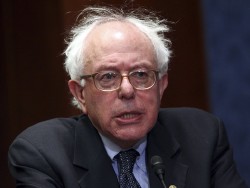 Ed. Note: This piece was published for the UK Guardian.

Bernie Sanders sits in his Senate office and reflects on another unexpected twist in his already unusual political life. As the only self-proclaimed socialist to sit in the US Congress, Sanders is long used to surviving in the political wilderness. But Sanders is now having to get used to a different environment altogether: the mainstream.

His constant slamming of Wall Street, his critiques of big business and the excesses of money in politics, as well as his call for a defence of American jobs, have become hot issues in US politics. The senator from Vermont is now a regular on American TV screens and rapidly becoming a fixture of US politics and a hero to many on the left.

The white-haired and irascible Sanders, 70, who is famed for his blunt outspokenness, almost became bashful at the thought that his exile from the mainstream appears to be ending.

“It’s, you know, nice to know that positions you have been advocating for years are now getting out to Main Street, and that millions of people are beginning to say: enough is enough,” he told the Guardian.

Is this, at last, his political moment? “Yeah, it is,” he said, and then he details why, in a typically long, passionate, Sanders-style explosion of stream-of-consciousness explanation.

“If you were to speak to any audience in America and you say: there’s something wrong with our system when the crooks on Wall Street, through their recklessness and criminal behaviour, are able to cause a recession, which has resulted in so much suffering to people, and then they get bailed out by the American people and then three years later end up making more money than they ever have before: people go nuts!”

He pauses for breath to think about the situation. “The short answer to your question is: ‘Yes’,” he says.

Sanders is unique in American politics. In a country dominated by a two-party system, he is the lone independent in the Senate. In a political landscape where “socialist” is essentially a curse word, he has carved out a successful political career, with a solid base of support in his home state. Tall, with a shock of white hair and a slightly dishevelled appearance even when wearing a smart suit, he speaks with the thick Brooklyn accent of his working-class childhood, even while inhabiting the rarefied atmosphere of the Senate.

Sanders also pounds out the same message every day: the middle class is being destroyed, the government needs to create jobs, the banks are corrupt and big money has bought both political parties and made a mockery of American democracy. His Twitter feed features a constant repetition of economic facts. A few samples from recent days:

“Since 2000, over 12 million Americans have lost their health insurance.”

“Since 2000, nearly 12 million Americans have slipped out of the middle class and into poverty.”

Such opinions would hardly make Sanders stand out in much of the rest of the world. His beliefs – which idolise Scandinavian-style social democracy – would fit comfortably in the middle left of Britain’s Labour party or Germany’s SPD. But it is impossible to over-state just how much of a political death sentence being called a “socialist” – nevermind actually proudly proclaiming it – usually is in America.

The strange bird out of Vermont

After all, many elected Democrats shy away from the “liberal” label out of a fear of being demonised as left-wing extremists. Yet, even though political opponents have accurately called Sanders a “red”, and the New York Times once derided him as “a strange bird out of Vermont”, Sanders has flourished.

Indeed, he says his beliefs chime far more with Americans than people think. “All I can tell you is that in every poll I have seen if you ask people: do you think the wealthiest people in this country should pay their fair share of taxes? Then the answer is: yes, they should,” he said.

He rattled off a long list of other issues in the same way, posing a question on an issue and then answering it for the voters in the affirmative: cutting excessive military spending, not cutting social security, creating well-paying jobs in America, closing corporate tax loopholes. “I don’t know if that makes us a left nation, but that is where the American people are coming from,” he insisted.

No doubt many of his opponents would debate that. But where does America’s solitary successful socialist come from himself?

Sanders was born in New York to a Jewish mother and father who had come over from Poland. His family struggled and never really broke out of its tough circumstances. Though Eugene V Debs, a leader of the Socialist party of America in the 1900s, is a hero to him, Sanders does not hesitate when asked what his main political influence has been.

“Growing up without lots of money. I didn’t have to have a book to tell me how a family gets by when there is not a lot of money. I saw unfairness. That was the major inspiration in my politics,” he said.

He worked hard at school, went to the University of Chicago and came across socialist politics. A spell at a kibbutz in Israel also showed him how a community could work together for a common good. He moved to Vermont with his first wife, and pursued a variety of jobs from writer to film-maker. He got into the state’s fringe left-wing politics. After various electoral failures, he finally ran for mayor of Burlington – Vermont’s biggest city – as an independent in 1980.

He won by just 12 votes. But it changed everything. Sanders proved himself a master retail politician. He may have been a socialist who made goodwill visits to the Soviet Union and Cuba, but he also got potholes fixed.

He promoted local businesses and brought a small baseball team to Burlington. In 1990 he ran for Congress and won, becoming the first socialist in the House of Representatives since the 1920s. He was re-elected seven times. By 2006 he ran for Senate. He won that, too, beating wealthy Republican Richard Tarrant, who helpfully drove a Bentley, which did not endear him to many poor Vermonters. Sanders crushed him and became the only socialist ever to sit in the American Senate.

It was a remarkable achievement. Though Vermont has a liberal streak and is often mocked as a haven of hippie-ish counter-culture (it is the home of Ben and Jerry’s ice cream), it has actually historically favoured Republican politicians.

Sanders dismisses the idea that someone like him could only come from a state like Vermont. Jobs and inequality are hardly a Vermont-only concern, he says. “All these issues will resonate in every state in the country,” he says.

They are certainly resonating now. The Occupy Wall Street protests, which began in New York and have spread rapidly across America and the world, have sharpened debate on some of the glaring inequalities in American life.

Statistics pointing out that 1% of Americans own 42% of the country’s wealth have become part of the national conversation. After initially slamming attacks on Wall Street, some Republican politicians have even started admitting that the economy looks a little slanted.

For Sanders – whose fame is such that most people just refer to him as “Bernie” – this is old news. He has been saying this for years. In his office, he sits on a couch in front of which are a spread of more than a dozen newspapers and magazines.

He vehemently attacks the media for ignoring him up to this point. “If you look at the newspapers here – the Washington papers – most of the discussion deals with campaign gossip,” he said.

“But campaigns never stop and they focus on personality rather than say: ‘OK, the middle class in America is collapsing. Why is that?’

Sanders picks up one magazine off the table which features a prominent Tea Party politician, and reads out the headline with a scornful laugh. “Rand Paul finds his groove?” he says incredulously. It is hard to get Sanders to talk about such trivia. Every question comes back to economics and the current hard times. His passion is relentless and his sentences endless.

He believes big business has bought off the political elites of both parties.

“Washington is dominated by big money. So you have an overwhelming majority of Americans who believe the wealthy should pay their fair share. But you know what? The lobbyists from Wall Street and corporate America happen not to agree with that, and they’re the ones that make campaign contributions. They are knocking on Senators’ doors. They have undue influence. The vast majority of the American people feel that we should be tough on Wall Street. Unfortunately, Wall Street spends hundreds of millions of dollars to suggest that we loosen up,” he said.

It remains to be seen what will become of Sanders’ moment in the sun. He supports the anti-Wall Street protests, but he has joined the critics who want them to organise, get an agenda and try to get people elected. “I think what the Wall Street folks are doing is focusing attention. That’s great. But it’s not enough. What is your agenda? Wall Street is greedy, reckless and they operate illegally. That’s fine. But what do you do?” he said.

But there is one thing Sanders himself will not be doing: running for president.

Earlier that day, one of Sanders’s secretaries in his Senate office had fielded a phone call from a supporter urging him to run for the White House. “He has been asked multiple times and he’s declined. He’s happy serving the people of Vermont,” she patiently explained to the caller.

It is not an uncommon request. But Sanders is adamant he will not run, even though he is harshly critical of Barack Obama. Sanders does not want to become a 2012 version of Ralph Nader, whose 2000 campaign is blamed by some for robbing Al Gore of a vital few percent and paving the way for George Bush. Walking to the Senate to vote, Sanders strides past other Senators and attracts a mini-gaggle of reporters.

But, he explains, he is not interested in the White House. “I would likely end up causing a right-wing extremist to be president of the United States. That is not something I would be happy to do,” he said.

Then he added for emphasis: “It would likely be a futile and losing campaign. That would not be too smart.”

Sanders is many unusual things: loud, outspoken and a successful socialist in America. But one thing he is not is naive.