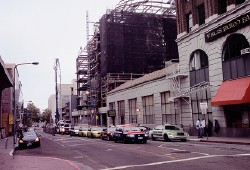 The last few weeks have seen the sudden rise of a new group in Berkeley: Revitalize Downtown. They are downtown property owners, developers, and businesspeople, and self-proclaimed environmentalists from the ironically named Livable Berkeley (really a developers’ lobby), working to prevent the Berkeley City Council’s Downtown Plan from being put on the ballot.

The Downtown Plan passed by the Council removes provisions for affordable housing, open space, workers’ rights and protections for neighborhoods worked out over two years by the committee the Council appointed to strike a fair balance between development and community needs. Those of us gathering signatures for a referendum want the eviscerated version to go before voters, so that citizens can weigh in on this crucial envisioning of our downtown’s future.

Revitalize Downtown is employing harsh tactics to stop this effort. They are organized and clearly trained, because when they see a signature gatherer talking to someone, they all do the same thing: they step into that small, very precise space people who don’t know each other maintain when talking to each other in public, hand that person a leaflet and say, “Don’t sign this petition. Read the other side first!” When the gatherers object to this behavior, they explain that they are just exercising their constitutional rights. Then they argue so heatedly that the police have asked both sides to leave.

The constitutional right these people are claiming is free speech. But what they are doing in the name of free speech is in fact meant to stifle free speech.

If free speech is really what they wanted, they would approach people civilly like the petitioners do, and ask them if they could spare a minute to discuss the future of downtown Berkeley. But like the Republicans breaking up town-hall meetings on health care reform, they succeed by disrupting discussion.

The disrupters have a huge financial stake in the Council’s Downtown Plan; they are developers and their employees, members of the Planning Commission who make their living in real estate, the former city Zoning Officer, the President of the Downtown Berkeley Association. They are people who under normal situations would behave respectably in public; but, like many people with a mission, they have convinced themselves that their important purpose justifies behavior that they would be ashamed of under “ordinary” circumstances.

The campaign to put the Berkeley Downtown Plan on the ballot has responded as best we can under the intense time pressure that we face. (We have 30 days, until August 20th to get 5,558 signatures.) We’ve told petitioners how to calm a tense situation. We’ve also set up a private location (Urban Ore, 900 Murray Street at the foot of Ashby), where people can sign without being harassed.

It would be fine if the disrupters would allow petition gatherers to have their own discussions, and from a non-threatening distance explain their side of the issue. But this strategy of creating intense scenes in public in order to frighten people away from the petitioners is anti-democratic in design and function.

Mayor Tom Bates and those Councilmembers whose appointees to prominent city commissions have been most visible among the counterorganizers should ask them to change their tactics to reflect the democratic principles they surely, if they examined their own behavior coolly, would realize that they’ve abandoned.

Jesse Arreguin represents the downtown and the area around it on the Berkeley City Council.