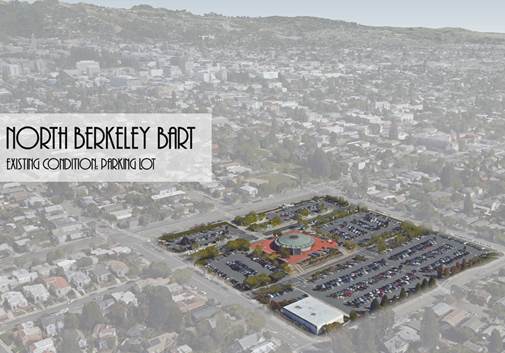 On May 29, the Berkeley City Council votes on whether to oppose AB 2923, which makes it easier to build housing on BART property. Sponsored by Assembly members David Chiu and Tim Grayson (D-Concord), the bill requires the elected BART Board to adopt new transit-oriented development (TOD) guidelines and to establish minimum local zoning requirements for BART-owned  land. It also mandates a minimum 20% affordability requirement.

AB 2923 is co-sponsored by the State Building and Construction Trades Council and the Non-Profit Housing Association of Northern California.  The large group of other backers includes the California League of Conservation Voters, Greeenbelt Alliance, several individual unions, housing groups and the City and County of San Francisco.

Mayor Arreguin and Councilmembers Maio and Hahn are asking the Council to join the opponents, which include the homeowner dominated cities of Concord, Lafayette, and Hayward. Councilmember Lori Droste, who opposes the Council proposal, expects it to easily pass. Droste feels that “in the interest of lowering housing costs, protecting our environment, and helping people find good-paying jobs, I cannot support a Council resolution opposing AB2923.”

Why would progressive Berkeley go against labor and environmental groups while aligning with non-rent controlled cities like Concord and Lafayette? After all, the only BART  housing currently proposed for Berkeley station is on the vast parking lot at North Berkeley,  and Arreguin says he supports housing on the site.

But as often occur when people claim to back housing, Arreguin’s “support” was not linked to a specific development plan. AB 2923’s delegation to the BART Board to establish “minimum zoning” has galvanized homeowner opposition, which fears that this “minimum” will be higher and denser than the local Council would approve.

Mayor Arreguin depends upon these owners of primarily million dollar homes for votes and campaign contributions. While he privately tells people he supports more development, he is loath to publicly oppose this key component of his political base.

When Joni Mitchell sang in Big Yellow Taxi, “they paved paradise and put up a parking lot,” she was speaking against this. Today’s housing crisis makes securing an affordable home feel like reaching paradise, yet Berkeley’s anti-housing boomer homeowners insist on denying these opportunities.

Few sites make more sense for housing than BART stations.  Yet getting housing constructed on these stations has run into one problem after another. That’s why housing and transit advocates cheered Assembly member David Chiu’s introduction of AB 2923.

As Chiu puts it, “We have seen examples of transit-oriented projects that took decades to complete.  People are struggling now, and we do not have decades to wait.  Ensuring cities plan for transit-oriented development near BART stations just makes sense, and AB 2923 allows for a collaborative planning process.”

San Francisco BART Director Nick Josefowitz agrees. “There is no better place in our region to build affordable homes for working people than right up next to a BART station. Families can not only save money on buying a car, but will have robust access to so many of the good jobs and educational opportunities across the Bay.”

East Bay housing advocates plan to turn out in force to support AB 2923 on May 29. According to Victoria Fierce of East Bay for Everyone, “The area surrounding North Berkeley BART is one of the wealthiest communities in the East Bay. For decades, local planning has limited the concept of “mixed income” development strictly to introducing high salary earners into low income communities. That isn’t fair to low income community members seeking access to the grand opportunities found in wealthier neighborhoods such as Rockridge or North Berkeley BART.”

The Berkeley Council majority that took office in 2017 is not knee-jerk opposed to new housing. Some members support new housing downtown, and the mayor has expressed support for housing on People’s Park.

But the Council majority routinely opposes new apartments in the city’s many  single family neighborhoods filled with homes selling for over $1 million. The area around North Berkeley BART is one such neighborhood.

Home prices in the area have skyrocketed over the past decade, and some longtime owners who have profited mightily from restricting supply do not want apartments built on the BART station. One way to accomplish this is to keep all decision making authority over the site under the Berkeley City Council rather than the region-wide BART Board.

This insistence on “local control” over a regional asset—BART stations—is why Berkeley will soon oppose AB 2923. Exclusionary zoning that produces class segregation is a way of life in Berkeley, and the Council majority aims to keep it that way.

At a March 15 community meeting to discuss building housing on the North Berkeley BART parking lot, most speakers favored housing. But as noted with Mayor Arreguin’s “support,” opponents routinely say they support the idea of housing while working against getting units built. Putting Berkeley on record against AB 2923 is part of this effort.

A number of BART stations will be represented by the winner of the hard fought Assembly D15 race. It would be interesting to hear from candidates where they stand on the issue even though the bill will be voted on this year.

David Chiu knows how to win tough legislative struggles. He has a strong track record of enacting pro-housing bills in Sacramento and,  helped by strong support from Tim Grayson, I expect AB 2923 to be among them.

Randy Shaw is Editor of Beyond Chron. He discusses Berkeley’s anti-housing policies in his upcoming book, Generation Priced Out, out in October from UC Press.