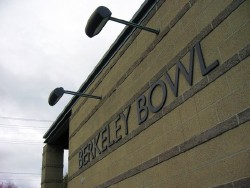 Six years ago, federal officials forced the owners of Berkeley Bowl to accept a union at their Oregon Street store. In 2003, 70% of the employees had voted not to unionize. After the United Food and Commercial Workers Union protested to the National Labor Relations Board, the NLRB – George Bush’s NLRB, mind you – found that the employer’s alleged unfair labor practices were so “pervasive and serious” that a fair election was impossible and ordered the Bowl to bargain with the union. The result was a contract that store employees ratified in August 2005 by a vote of 117-12. The union contract brought Bowl workers new benefits: previously workers had been fired at will; today they have a formal grievance procedure, as well as guaranteed paid vacations and health insurance for all employees. Now these gains are threatened by the Bowl owners’ new anti-union campaign.

The current contract expires on July 31. Three months ago UFCW Local 5 asked the Bowl to start new contract bargaining sessions; to date the company has failed to respond to the union’s request. Local 5 has a grievance pending over the termination of Olimpia Moreno, accused by the owners of giving a friend a discount on a sandwich; and another grievance pending over proposed changes on the employees’ health plan.

Meanwhile a petition to decertify the union has been signed by 30% of the 196 employees at the Oregon Street store – enough to trigger a decertification election. Tomorrow (June 23rd), the election will take place in three sessions conducted by the NLRB and monitored by one representative from labor and one from management. A simple majority vote will decide the outcome.

Efforts to preserve Berkeley Bowl workers’ right to union representation are underway. A pro-union workers’ committee is marshaling support on the shop floor. The UFCW has set up a table with information outside the Oregon Street store, staffed with its own members and representatives from other unions.

Last Saturday, members of the California Nurses Association, dressed in their scrubs and wearing pro-Berkeley Bowl worker buttons, went into the store to express support for the union. On Sunday, Harry Brill led thirty community members, many of them Berkeley residents and all wearing pro-worker buttons, into the store, where they engaged the workers in non-confrontational, pro-union dialogue and bought something on their way out.

Buttonless, I went into the store myself on Sunday. I saw workers with “Vote No” buttons and others sporting UFCW insignia. When I asked an employee in the produce section who had a “Vote No” button pinned onto his apron why he was against the union, he told me that he’d been working at the Bowl for ten years – and that since the union had come in, he was making only twenty-five cents more an hour.

Back outside, I passed that statement on to UFCW representative Julian Perez. “That,” said Perez, “would be hard to believe.” But in any case, he said, post-union increase in wages at the Bowl depend on exactly what employees were doing; some workers got raises of up to five dollars an hour; managers got less.

Outside the store, I also spoke to the Oregon Street Bowl manager David Craib. Earlier in the morning, Craib had called Berkeley Police to complain that pro-union activists were blocking the entrance to the store, violating the Bowl’s “solicitation policy” of staying at least fifteen feet away from doorways.

Berkeley cop Lyle Ledward showed up but, seeing no criminal behavior, only observed what was going on. I asked Craib if customers had complained about the pro-union activity. None today, he replied, but “this will happen throughout the day.”

Craib has worked at the Bowl for ten years, serving as store manager over the past year. “Management,” he claimed, “had no part in filing the decertification petition.” I asked him whether he had been meeting one-on-one with Bowl employees.

I assume that he knew that I knew that owners often use such meetings to initimidate workers; and that the Bowl had done so in 2003. “I talk to employees one-on-one all the time,” Craib said. About the decertification election, I asked? We talk “about current events in the store,” he said.

To Jim Grogan, Local 5’s Organizing Director, “this is a continuation of what happened in 2004….We can’t afford to be broken in the East Bay, and, more important, to lose the union at the Bowl.” According to pro-union store employees, the Oregon Street facility has a million dollars in weekly sales.

Results of the decertification election will be known by tomorrow evening.