by Moctesuma Esparza on December 4, 2012 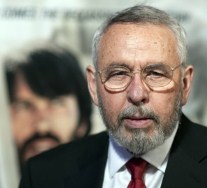 Argo is a 2012 feature film Hollywood thriller loosely based on a memoir written by Antonio “Tony” Mendez, a CIA operative, who led the rescue of six U.S. diplomats from Tehran, Iran during the 1979 Iran hostage crisis. The film stars Affleck as Mendez, was co-produced by Affleck, George Clooney, and Grant Heslov, and was directed by Ben Affleck. The film is well done and satisfying as a thriller, and is now being touted for awards consideration for the Golden Globes and Oscars. Although there are many issues with the historical accuracy of the plot as well as the portrayal of Canadians, and the Iranian people; and I understand these issues as I have made a career of producing historical films and biographies where I have striven to be as accurate as possible. I get that dramatizations and inventions are part of the necessary compromises needed to create a historical dramatic entertaining film. However, what has been done in Argo falls into a different category of perpetuating ethnic and racial invisibility of Latinos in Hollywood.

Antonio “Tony” Mendez is an American hero of Mexican ancestry whose exploits are dramatized in the movie Argo. He was awarded the Intelligence Star for Valor for his role in the rescue. He retired with the rank of SIS-2, the equal to a two star General in the military. He was also awarded the CIA’s Intelligence Medal of Merit as well as the Intelligence Star and two Certificates of Distinction. Antonio Mendez was one of fifty officers awarded the Trailblazer Medallion from among all officer in the history of the CIA.

I have a tangential connection to the events portrayed in the movie as I was working for Jerold Rafshoon, President Carters’ Communications Director in the White House during this time on the reelection media campaign. I witnessed the impact of the Iranian hostage crisis on the reelection efforts.

The concern I am focusing on here is the director/producer’s choice to portray Tony as if he is a white non-Latino, so he could play the role. This is classic “brown face” at its worst. There is no reasonable justification for this choice as the film could have been cast otherwise without affecting its commerciality.

Not only did a Latino actor not play Tony, who clearly in real life looks like a Chicano, but his ethnicity is stolen from the Latino community at a time when Latinos have been demonized. Our real Latino national heroes if acknowledged would dramatize our patriotism and contribution to the United States. The film actually goes out of its way to obscure Tony Mendez’ ethnicity. His name (Mendez) is mentioned only once and the character says he is from New York (Tony was born in Nevada from a mining family with six generations in Nevada and raised in Colorado). Nowhere in the movie does the viewer get that the hero is Mexican American.

Ben Affleck’s portrayal of Antonio “Tony” Mendez was very contained and had very little range, I don’t know what Tony personality is like to judge the portrayal but this did not impact the movie’s success or failure. It was an excellent role that would have elevated a Latino actor like Benjamin Bratt or Michael Peña.

Instead, like with the story of Guy Gabaldon, whose extraordinary achievements in the WWII Battle of Saipan, capturing, by himself, 1800 enemy soldiers, more than any other American soldier in the history of our country, was similarly white-washed as Jeffrey Hunter played him in the 1960 film, “Hell to Eternity.” But that was more than half a century ago, Argo is now.

In the closing credits, the photos of the real people portrayed are presented side-b- side with the actors’ photos showing the very close resemblance and care that was taken in the casting process to cast actors who looked like the real people. Yet, for the key role of Tony Mendez, the director/producer Ben Affleck chose a single long shot of Tony with President Carter where his image was not distinct or recognizable, breaking the pattern he had chosen for all the other real people depicted.

In Argo we have yet another instance where the public has been denied of an opportunity for all Americans to learn of an American Latino’s valor, talent and patriotism. This occurs because there has been no consequence to this behavior. It is time for a change.

Moctesuma Esparza is an award-winning producer, entertainment executive, entrepreneur and community activist. He is CEO of Maya Cinemas, a first run mainstream theater chain in the United States principally located in and serving Latino communities , and a partner of Robert Katz in the company Esparza/Katz Productions.. He can be reached at moctesumae@mayacinemas.com.