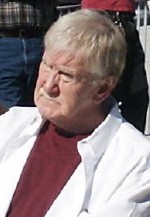 Bill Hart, the extremely well-respected and well-liked Executive Director of GAAP: The General Assistance Advocacy Project, died in his sleep on Tuesday, November 22, 2010 while recovering from an extended hospitalization.

Hart’s piercing intelligence and wry wit were key aspects of his tenacious-yet-lovable style. He had been a very successful banking and insurance executive in the Bay Area for 20 years before “falling down” and becoming homeless on the streets of San Francisco. In the years that followed, Hart rose back up and put his mind, his heart and his MBA to work for the society’s “little people” who so often get lost in the ever-changing mazes of public assistance rules and regulations.

Hart first came to GAAP as a homeless client and became as a community volunteer in January 2001, before eventually rising to the Executive Director position in March 2004.

“Bill’s passionate advocacy on behalf of the poor and homeless women and men in San Francisco fully encompassed him,” said Sister Bernie Galvin, a friend who worked closely with Hart for several years.

“The kind and gentle demeanor with which he sought to relieve the suffering of the poor endeared him to all. I never met anyone who did not love and respect Bill Hart. He leaves a great void in our hearts and in this community.”