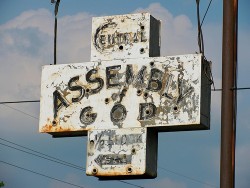 People always say that without religion, society would disintegrate into a barbaric state. A new study shows that they’re dead wrong. “First world democracies” in which people practice religion the least are prospering more than those that have a higher rate of religiosity. People are happier and more economically stable, for instance, in the Scandinavian countries where belief in religion is at an all-time low.

The United States, on the other hand, ranks highest of the 17 nations surveyed in terms of religion, but at the bottom of the barrel when it comes to prosperity, according to independent researcher Gregory S. Paul’s study, “The Chronic Dependence of Popular Religiosity upon Dysfunctional Psychosociological Conditions,” which is posted online in the journal Evolutionary Psychology.

Unlike many others in his field, Paul does not think that humanity is hardwired for religion, nor that belief in a higher being is necessary for a society to achieve a high level of functionality.

“Popular religion,” Paul says, “is a coping mechanism for the anxieties of a dysfunctional social and economic environment.” Simply put, it means that without safety nets such as universal healthcare (which more prosperous democracies have), people depend on the “supernatural entities that could be petitioned for aid and protection.”

“In view of the reduced levels of religiosity consistently extant in populations that enjoy secure middle class lives,” Paul writes, “it can be postulated that if socioeconomic conditions had been similarly benign since humans first appeared it is unlikely that religion would have developed to nearly the degree seen in actual human history, and atheism would have been much more widespread and possibly ubiquitous since the beginning.”

It was our hunter gatherer ancestors “living impoverished and dangerous lives” who created religion, their “minds influenced by dreams and perception altering drugs that appeared to provide a connection to alternative worlds.”

In his study, Paul looked at social indicators such as crime, suicide, drug use, incarceration, unemployment, etc. He measured religiosity based on factors such as church attendance, belief in a supreme deity, and adherence to the bible as the literal word of the being in the sky.

The results are not pretty. “Homicide levels in the U. S,” Paul reports, “have always been elevated well above the rates in the more secular democracies where murder rates have long been low and relatively stable, perhaps representing the minimum practically possible. Despite a recent decline from an extreme peak in the 1980s, homicide rates are still many multiples higher in the U.S. than in any other 1st world nation, in some locations 10% of American males are murdered before age 35. Street crime-ridden cities like Detroit, Baltimore, DC, Atlanta, and New Orleans are not found in the other advanced nations.”

As Phil Zuckerman, author of Society Without God: What the Least Religious Nations Can Tell Us About Contentment, describes it: “The important thing we’re seeing here is that progressive, highly functional societies can answer their problems within a framework of secularity. That’s a big deal, and we should be blasting that message out loud.”