Before Progressives Nominate a Mayoral Candidate… 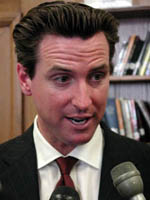 With Saturday’s Progressive Mayoral Convention, talk is heating up about who gets to oppose Gavin Newsom in November’s election. But there is also debate about whether or not Newsom is beatable, and how much a progressive mayoral campaign would cost. Progressives are currently stuck between two unattractive choices – a suicide mission to take him on, or complete capitulation by not running anybody.

Newsom might have clinched re-election with his work on gay marriage and lots of talk in supporting progressive issues. But it is his failure to follow through on these issues that has given progressives a leg to stand on in November. Before spending a lot of resources in an uphill battle, progressives have the option of presenting the following challenge to Newsom – follow through on lip service you have made with actual substance, or else we will field a candidate.

Presenting Newsom with an opportunity to follow through serves several purposes. Should the Mayor accept, progressives will have scored a major victory without getting into an expensive fight. If Newsom does not accept, this gives the ensuing progressive campaign a strong platform to stand on – and would clarify for voters why progressives must challenge Newsom.

If Newsom were to address the following issues—all of which he has documented support for, despite opposition from his allies in big business—he could assure himself re-election. And to progressives, who have always been concerned with issues above politics, coming though on these important issues would be a victory greater than any local election could provide.

Newsom has survived scandals to remain a hot commodity in the California Democratic Party. Rather than spending this on a Mayoral campaign, the Mayor should instead use his political capital to follow the recommendation from San Francisco People’s Organization that he “expand affordable housing revenues by capitalizing on his ties and reputation in the Democratic Party to leverage State and Federal funding for San Francisco.”

Progressives have accomplished much locally to support tenants’ rights and affordable housing. But the Ellis Act is a major roadblock to getting real tenant protections, and funding is always needed for public housing projects. Newsom has the personal connections to make quick work of this problem, considering that the State Legislature is stacked full of Democrats who’d love to get on Newsom’s good side and happen to make up a majority.

Three years ago, Newsom proclaimed that he would sign his own recall petition if the surge of murderous violence that consumed the City could not be slowed. More recently, the Mayor expressed regret over his failure to stop the killing before appearing to be the only politician to not support Proposition A, last year’s community-based violence prevention program.

Proposition A was not some kookie scheme hatched by radicals; rather, it was endorsed by the Public Defender, the District Attorney, and a massive slew of community organizations and individuals. It narrowly lost in part to its placement in a low-turnout June election, a lack of Mayoral support and opposition by the Mayor’s allies at the Police Officers’ Association. But it is not too late for Newsom to change his mind, for the violence has gone on far too long for the City to not try anything new.

If there’s a will, there’s a way – yet the Mayor appears to think there’s already a way. Gavin Newsom’s talk of supporting a free public transit system came on the heels of years of progressive support on the issue only to fall flat. What has been needed is political support and pressure for Newsom to follow through on an excellent imitative. As previously described, this year is the perfect time to make this switch.

Muni is one of those rare issues that touch on so many of the challenges which face our City. Free Muni would support the environment, curb congestion, and financially support those in need—and all at a negligible cost. What is needed is the political opportunity.

Community choice energy (also called Community Choice Aggregation, or CCA) is a public power system where the City takes responsibility for purchasing electricity in bulk. This lessens PG&E’s role in the market, and allows for San Francisco to choose more environmentally-friendly providers. Current plans call for 51% of the energy to be from renewable sources (the largest such ratio in the nation) and would build the largest distributed solar network in the world.

Newsom, in addition to often touting his “greenness,” has been said to be generally supportive of CCA. In 2004, the Mayor allocated $5 million to the project for staffing and research. But more recently Newsom requested to appear at a major CCA press conference, which he also requested to be pushed back—twice—for his attendance, only to not show up. Newsom has been rumored to like the idea, but has hesitated to show leadership. Progressives can provide the political opportunity for Newsom to do so.

5. Build Up the City’s Revenue through a Gross Receipts Tax

In a City always short on cash and long on ideas, generating enough revenue is a challenge that calls for new approaches. A gross receipts tax is a solution – as a more progressive alternative to increasing payroll taxes.

Newsom surprised many when at a February 15th speech sponsored by SPUR, a pro-business think tank, the Mayor voiced support for gross receipts tax as a possible solution. Having initially promised to bring more revenue to the City only to see two tax measures fail on the 2004 ballot, Newsom here has an opportunity to redeem himself.

These five issues hit at the core of what progressives have focused on. It is unfortunate that Newsom has not followed through after speaking so favorably of these initiatives, and the truth is that inaction has negatively affected his political aspirations.

Progressives are poised to confront the Mayor at the ballot this November, and rightfully so. However, it would be hard to believe that any progressive wouldn’t rather see these issues become reality than fight an uphill battle.