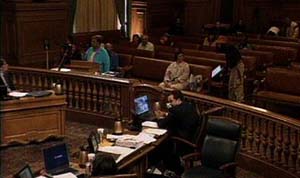 With just three weeks left to qualify a referendum on the Bayview Redevelopment Plan for the ballot, organizers say they’ve obtained more than 18,000 signatures. While the city only requires 20,800 signatures to qualify, the campaign probably needs at least 10,000 more signatures to compensate for the thousands city officials may throw out as unverifiable. Campaign organizer Brian O’Flynn remains optimistic about their chances, and is currently paying for an independent party to review the already obtained signatures and estimate how many the city will approve.

The battle to bring the Bayview Redevelopment Plan to the ballot began three months ago, when the Board of Supervisors voted 6-3 to give more than 1,300 acres of property in the city’s southeast sector to the Redevelopment Agency. A campaign to defeat the measure at both the Planning Commission and the Board, headed up by a coalition of Bayview activists who argued the plan would bring gentrification and a lack of democracy to the area, failed.

These activists then joined with groups outside the neighborhood also opposed to Redevelopment, and began an effort to place a referendum of the plan on the ballot. Such a referendum would prompt a special election, and would not appear on this November’s ballot.

While gaining 10,000 more signatures by August 27 may seem daunting to some, campaign organizers claim a strong base of volunteers will help them reach the mark.

“We’re definitely planning on collecting enough signatures by the deadline,” said O’Flynn. “It’s a grassroots effort, though, and we could always use more help.”

Campaign organizers currently aren’t paying anyone to gather signatures, relying instead on volunteers. O’Flynn says that if anyone is interested in getting involved with the effort, he can be reached at 867-4370.