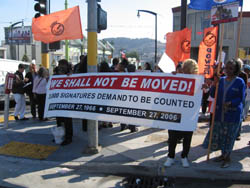 The San Francisco Department of Elections confirmed yesterday that the Bayview Affordable Housing Initiative has qualified for the June ballot. After reviewing all 11,811 signatures to verify that they were registered voters, the Department confirmed that at least the legal minimum were valid. This sets up a contentious fight on the ballot between two different visions for Bayview-Hunters Point: (a) the Lennar Corporation’s initiative to redevelop the neighborhood and “save” the 49ers and (b) a demand that at least 50% of such new housing be affordable. Months ago, I predicted that the June ballot gave progressives a unique opportunity – because a good East Side turnout may counteract traditional West Side advantage. While it’s still a question whether that will be enough to pass the Affordable Housing Initiative, its presence may put the Lennar measure in jeopardy.