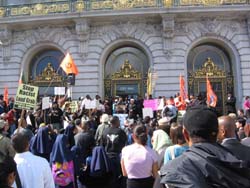 With the November election just two weeks away, a disturbing dispute over the Bay Guardian’s description of pro-Prop 90 Bayview activists as “zombies”has sapped enormous energy out of San Francisco progressives. More disquieting, it has generally pitted white progressives (the “Bay Guardian” crowd) against black homeowners who live in the Bayview. While these two groups have worked in common cause in the past year to fight the Bayview Redevelopment plan, the fissures erupted after City Attorney Dennis Herrera invalidated the 33,000 signatures that would have challenged Bayview Redevelopment at the ballot box. In response to this sudden disenfranchisement, some Bayview activists poured their energy into passing Proposition 90 – which would not only limit eminent domain, but also make it impossible for the government to ever effectively regulate private property for the public good. This division became readily apparent at the September 27th march that was ostensibly organized to protest the City Attorney’s recent action. Some activists who attended the march to support Bayview residents were shocked and angry, but their gut reaction (treat the Bayview residents as clueless idiots) has done more harm than good.

Politics is all about building coalitions, and if you want to create a large, diverse coalition to mount a winning campaign, you inevitably have to build common ground with people who you don’t always agree with. When something bad comes along, opponents may come together but oppose it for different reasons. And to an extent, that’s what we saw with the Bayview Redevelopment Plan. The vast majority of progressive activists oppose Redevelopment because of its atrocious track-record on the city’s neighborhoods, and expanding it into the Bayview will gentrify the last affordable part of San Francisco. But a certain number of Bayview homeowners oppose Redevelopment for a much simpler reason – to them, Redevelopment means eminent domain, and they figure that bulldozers will start coming in and start seizing their homes. Because Prop 90 has been billed as an effort to “stop eminent domain” and “protect our homes,” this message has resonated – and they may not care to listen about Prop 90’s more dangerous ramifications.

Of course, Prop 90 is not just about limiting eminent domain. It also changes the definition of a “regulatory taking” so that any regulation that causes a property owner to lose profits would be unconstitutional. It was authored by Howie Rich, a libertarian real estate developer from New York whose real agenda is to end all government so he can make obscene profits. Like others who attended the September 27th rally in Bayview, I was floored that neighborhood activists would support Prop 90, and I explained in Beyond Chron why Prop 90 was the last thing that the Bayview needed.

But right-wingers always thrive when they succeed at pitting us against each other, so after that one article I decided to knock it off and stop criticizing the Bayview activists. Instead, I turned my focus on attacking Proposition 90 – and explained why Prop 90’s likely effect would be to make any effort to help tenants unconstitutional – including San Francisco’s Proposition H. While it is disquieting that some Bayview activists support Prop 90, explaining why it is bad without directly chastising them for supporting it was the more productive and diplomatic approach.

Unfortunately, other progressives couldn’t resist chiding the Bayview activists. The Bay Guardian refused to endorse Marie Harrison for District 10 Supervisor because she supports Prop 90. In his weekly column, Executive Editor Tim Redmond attacked Willie Ratcliff and Marie Harrison for supporting Prop 90 “for some reason that I find hard to understand.” Their support for Prop 90 was certainly confounding, but for Redmond to say that it was more scary than the “redevelopment bulldozers” displayed a lack of sensitivity for why some Bayview residents would support a right-wing draconian measure. The Bay Guardian’s coverage may have hurt Ratcliffe and Harrison’s credibility among progressives, but it certainly didn’t help them change their mind about Prop 90.

More troublesome for the Bay Guardian was the headline chosen for Redmond’s article. While Redmond did not okay or even read the headline that the Guardian’s copy editors selected, calling it “Prop 90 Zombies” dangerously backfired. “Zombies in the headline is an interesting choice of terms,” replied Mary Ratcliff. “It evokes B-movies made during the era of the Duvaliers’ reign of terror in Haiti – movies that used ‘zombies’ to demonize voodoo, a vital living religion with African roots that unifies and girds the people of Haiti to resist the racist, imperialist oppression that still threatens them today.” Redmond apologized for the headline, and had it removed from the Guardian’s website (it fortunately never made it in the print edition.)

Other responses from Bayview residents raised a serious question – why didn’t white progressives take an earlier interest in the plight of Bayview-Hunters Point? This is the same argument, ironically, that Supervisor Sophie Maxwell has repeatedly made in favor of Redevelopment. In other words, at least they’re trying to come up with a solution because the status quo is unacceptable. But Mary Ratcliff’s point that Prop 90 will probably get litigated in court if it passes is dangerously naïve. Prop 90 is a constitutional amendment, and it’s doubtful that the worst part of Prop 90 dealing with regulatory taking would be found unconstitutional.

Fortunately, some of the Bayview activists have come to understand that promoting Prop 90 while protesting the Redevelopment plan is divisive and hurtful. At last week’s City Hall rally to protest the oncoming displacement of African-Americans from Bayview, organizer Willie Ratcliff did not mention Prop 90 at all. And now that the Guardian has removed the offensive headline and will hopefully stay focused on educating voters why Prop 90 is deceptive and dangerous, we can avoid letting right-wing political operatives divide our community.