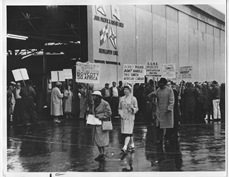 With the passing of Nelson Mandela, our responsibility is to commemorate the global fight against apartheid and—more importantly—follow his lead and push for radical change in our own times. Though a tremendous leader, Mandela sat in prison for decades while millions of people, in South Africa and around the world, built the most impressive global movement in recent history. In the San Francisco Bay area a passionate cadre of longshore workers led the to fight to overthrow the racist, oppressive regime. In November 1984, days after Ronald Reagan’s landslide re-election, members of Local 10 of the International Longshore & Warehouse Union (ILWU) refused to touch South African cargo for eleven days, arguably the most dramatic act in the Bay area, itself a leader in America’s anti-apartheid movement.

Ten years prior, during a nationally-televised interview with Bill Moyers, Harry Bridges, the founding president of the ILWU, explained why his union refused to load scrap iron for fascist Japan in the 1930s: “Interfere with the foreign policy of the country? Sure as hell! That’s our job, that’s our privilege, that’s our right, that’s our duty.”

However, it was not Bridges—who retired in 1977—who applied the same tactics and principles to the anti-apartheid struggle. Rather, ordinary members of Local 10 created, led, and populated a bold movement on behalf of oppressed workers halfway across the world. For apartheid not only denied nonwhite people equal rights, at its core apartheid exploited millions of workers who toiled in the gold and diamond mines and other industries of South Africa. Black and white longshoremen, self-consciously members of the Left, long had taken an interest in and fought against apartheid. As early as 1962, members of Local 10 refused to cross a small community picket that protested the unloading of South African cargo. There are scattered reports of informal, “quickie” strikes of South African cargo in this era, too.

In 1976, after the student uprising in Soweto, a handful of Local 10 radicals convinced the local’s membership to create the Southern African Liberation Support Committee. Led for its entire existence by Leo Robinson, an African American and left-winger who himself recently passed away, this committee raised awareness for years among their fellow workers as well as up and down the West Coast, connecting with other unionists, students, and religious people who joined this growing movement.

The longshoremen’s most impressive act was their 11-day boycott in 1984. At the union’s monthly meeting, the committee screened an intense documentary called Last Grave at Dimbaza, which provides, in sixty minutes, an excellent primer on why every human should stand against apartheid. Sure enough, right after the film, the members unanimously voted to boycott the next ship carrying South African cargo.

A few weeks later, the Nedlloyd Kimberly arrived docked at San Francisco’s Pier 80. Billy Proctor, a radical in Local 10 whose father also had been one, recalled the scene: “South African cargo was not the only cargo, so we worked some breakbulk cargo from Argentina as I recall, then after about two hours, from below deck I heard our Ships Clerk yell up to me, ‘that’s it Proctor, nothing left down here but razor wire (cortina) and auto glass from South Africa.’ I then said, and I shall never forget it….’okay fellas, come on out of the hold, I ain’t hoisting one ounce of cargo from South Africa’ and the movement of cargo came to a halt, we then left the ship.”

Although the mainstream media did not initially cover these events, nearly unprecedented in the United States, word spread and hundreds of ordinary people spent the next ten days at Pier 80 to give longshore workers support—by singing, chanting, and making witness. The International President, Jimmy Herman, and the entire International leadership kept their mouths conspicuously shut in November 1984, presumably fearful of a backlash though the International had formally endorsed policies critical of apartheid South Africa at its international convention. Even after the events occurred and received near-universal praise, the International was cautious: the short article in the union’s paper, The Dispatcher, was painfully vague and distanced the union from the acts of “individual” members acting on their “consciences.”

One might think that everyone opposed apartheid but that is false. Many Americans suggested that this fight wasn’t ours. Others claimed that anti-apartheid activists, including Mandela, were communists and, thus, deserved our enmity rather than our sympathy. President Reagan had just won re-election in a landslide—57.5% of Californians voted for him. Reagan and Margaret Thatcher, meanwhile, were busy ramping up the Cold War and doing as little as possible for South Africa’s black majority.
Instead of looking to elected leaders, in Washington DC or their union, rank-and-file workers put their livelihoods on the line to fight apartheid.

For the next eleven days, as hundreds protested daily and the boycott finally made the news, the South African cargo remained in the hold. Ultimately, a federal judge granted employers an injunction that threatened union leaders with prison and massive fines. The workers, having made their point, unloaded the cargo.

This week, as Mandela achieves the status of saint, it is worth considering that workers—in South Africa and around the world—arguably played the central role in this fight. Mandela said as much when he visited Oakland in 1990, a few months after his release from prison. He devoted fully 10% of this speech to thanking the members of ILWU Local 10. We all should appreciate this History as much as Mandela did.

Peter Cole is a Professor of History at Western Illinois University in Macomb. He is the author of Wobblies on the Waterfront: Interracial Unionism in Progressive-Era Philadelphia and currently is writing a book on the history of longshore workers in the San Francisco Bay area and Durban, South Africa.