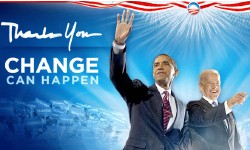 For those who can’t afford the long and expensive journey to Washington D.C. for Barack Obama’s Inauguration, there are many events (some of them free) on January 20th in San Francisco and Oakland that locals can partake in. The following is a recommended list of festivities:

Inauguration Simulcast at Civic Center: Civic Center Plaza – in front of San Francisco City Hall, 7:00 a.m. to 12:00 p.m. Join NextArts for the simulcast. No entrance fee, but organizers ask that you bring new socks or underwear as a charitable donation. Items must be new.

Inaugural Ball at Electric Works: Electric Works – 130 8th Street, 6:00 p.m. to 10:00 p.m. Benefiting the San Francisco Food Bank, suggested donation $10. Inauguration speech will be re-broadcast at 7:00p, with dancing from 8:00 p.m. on. Drinks and light hors d’oeuvres will be provided. Formal dress suggested but not required. (Changing rooms and borrowed finery will be available for those coming directly from work.)