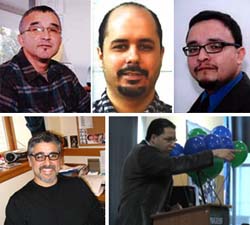 Nearly a year and two elections will pass before San Franciscans go to the polls in November 2008, but Supervisor races are already in high gear. Districts 9 and 11 are shaping up as the most interesting contests, as each include multiple progressive candidates. In District 9, Police Commisioner David Campos, School Board member Mark Sanchez, and Mission Anti-Displacement activist Eric Quezada are squaring off to replace Tom Ammiano. In District 11, Community College Board member Julio Ramos, Supervisor Daly aide and longtime labor activist John Avalos, and Cecilia Chung, a Milk Club activist and head of the Transgender Law Center, are competing to replace Gerardo Sandoval. Activists are already choosing sides in these campaigns, which will hopefully boost rather than fracture progressive unity.

As San Francisco’s November 6 election approached, campaigns for an election over one year away were in a high-energy mode. It seems that the early start to the 2008 Presidential primary season has been reflected in our local races, as Supervisor candidates scurry to win key endorsements that will give them a boost on their competitors.

The most intriguing battle will be fought in District 9. Not only are there three progressive candidates, but the race mirrors some of the divisions among progressives that appeared in the 2003 mayor’s race between Ammiano and Gonzalez supporters.

Tom Ammiano endorsed David Campos prior to his even having a serious opponent. But the popular incumbent is also friendly with the other two leading candidates, so is not expected to spend much political capital in the race.

Mark Sanchez is the only leading candidate to serve in elected office, and has assembled a campaign team largely drawn from Matt Gonzalez’s 2003 mayoral campaign. Electing Sanchez appears to be the Green Party’s top local agenda for 2008, and many of the experienced activists from District 5’s successful Mirkarimi campaign in 2004 will be walking streets for Sanchez.

Campos and Quezada are both Democrats, with the former almost certain to get the Democratic County Central Committee endorsement. Campos will also likely get the Harvey Milk Club endorsement, and is a shoo-in to win the nod from the Alice B. Toklas Democratic Club.

Quezada is backed by Supervisor Chris Daly, and could generate a grassroots outreach operation that rivals Sanchez. But Quezada is unlikely to raise anywhere near the money of his competitors, which could hurt his chances.

Had Sanchez not entered the race, Quezada could have framed his campaign as an anti-Establishment grassroots insurgency against Campos, who is perceived as more mainstream. But Sanchez is not vulnerable from the left, and his laid back style will not scare away more moderate voters. Many believe Sanchez will be helped by being a longtime school teacher, with Ammiano also using his classroom experience to first win election to the School Board and then to the Board of Supervisors.

Because Ammiano was a District 9 icon who drew voters who were not necessarily progressive, the 2008 race will tell us more about the district’s politics. Will the Harvard-educated lawyer Campos be perceived as too moderate despite his progressive stands,” or will his opponents be seen as too far to the left?

Will Sanchez and Quezada split the more left-progressive vote, or will this be a replay of the District 5 Mirkarimi-Haaland race of 2004, where the Green Party candidate pulls away from the field?

An unusually high number of experienced progressive activists will be involved in the District 9 race, which will be the most high-profile Supervisor’s contest. Expect a fierce fight for the Bay Guardian and San Francisco Tenant Union endorsements, which could prove particularly critical. Guardian Executive Editor Tim Redmond lives in the district, so will have a close up-front look at all of the candidates.

Bernal Heights has many narrow streets, and activists from the three campaigns will be running into each other as they try to reach doors and distribute literature. Redmond is not the only District 9 voter who will get more than their share of attention.

The district also includes the Mission south of 18-20th Streets, but which candidate will get these progressive Mission votes is unclear. Quezada’s housing activism would seem to give him a boost, but some find him divisive. Sanchez is the only one of the three who lives in the Mission, which could hurt him in Bernal Heights but help him on his own turf.

Whoever wins District 9 will be a solid progressive vote in the Ammiano tradition.

The two leading candidates to replace Gerardo Sandoval are Community College Board member Julio Ramos, and Daly supervisorial aide and labor activist John Avalos. Cecilia Chung is active in the Harvey Milk Club and will get some progressive support, but this shapes up as a tough two-person race.

Since Avalos endorsed Quezada in District 9, it is likely that Mark Sanchez will back Ramos. This could result in alliances between the progressive District 9 and 11 candidates, and increase volunteers for all four campaigns.

Supervisor Sandoval is backing Ramos, though the extent of the incumbent’s influence among 2008 voters is questionable. Daly is backing Avalos, which some see as a mixed blessing in a district where Chris Daly may not be wildly popular.

Avalos has a long history in the labor movement, and will certainly be backed by the San Francisco Labor Council, SEIU and other key unions. This support could be particularly pivotal in an election where labor activists will be particularly involved in GOTV work, and are often the only game in town pulling voters to the polls.

District 11 also has the most union-heavy electorate in the city, which will help Avalos’ chances.

Like Sanchez, Ramos had the advantage of having appeared on the ballot, and of having won a citywide race. He is an attorney who should have an easier time raising money than Avalos, though both candidates should have enough money so that their presentation, rather than campaign spending, will likely determine the race’s outcome.

It is way too early to make a prediction in this race, but I stand by my assertion last week that Daly’s alleged negative influence on Avalos’ campaign is being greatly overstated. District 11 voters easily re-elected Sandoval despite vicious mailers trying to tie the incumbent to all kinds of bad people and causes—this is a district that clearly looks at the candidate on their own merits, not on who is supporting or opposing him.

Progressive candidates are also running in Districts 1 and 3, but 9 and 11 is where they are running against each other. June 2008 promises to be among the busiest local election seasons ever (the state anti-rent control initiative plus Leno-Migden), and the same is looking true for November.