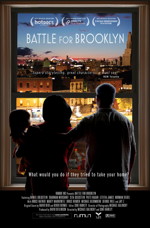 In October 2009, I wrote an article about activists waging an incredible struggle in Brooklyn to prevent a publicly subsidized sports arena and highrise office developments at Atlantic Yards. A film of this campaign, “Battle for Brooklyn,” shows at the Roxie Theater at 16th Street near Valencia tonight at 7 and 9 pm. It should not be missed. The film is on the short list for an Oscar nomination in the Best Documentary category, but its populist message has found it not reaching wide distribution. Tonight offers a great chance to see how power is exerted in major cities in today’s world, with Atlantic Yards being among the most notorious examples.