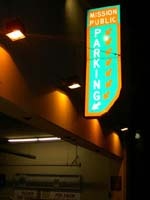 Representatives from the Metropolitan Transportation Agency (MTA) were in the hot seat yesterday at the Government Audit and Oversight Committee meeting. The decision to award the Mission’s Bartlett Garage contract to Pacific Park Management was under much scrutiny by Supervisor Tom Ammiano.

The nonprofit Mission Economic Development Agency (MEDA) had managed the garage for 14 years. On February 7, the MTA approved a new contract to operate the garage with Pacific Park Management, after a request for postponment was ignored. The MTA is fighting allegations that MEDA was treated unfairly because they technically scored higher in the bidding process.

Ron Szeto, acting Director for the Parking Authority, denied accusations that an MTA representative told MEDA that the garage would be better managed by someonelse. In the decision-making process, MTA board members are supposed to weigh 60 percent for the bid and 40 percent for the proposal. Pacific Park Management was able to do a zero bid, which won them the contract.

Supervisor Aaron Peskin asked if an operator like MEDa, which only runs one parking garage, could feasibly submit a zero bid.

Szeto said no. In fact, it was revealed that the only other garage operating with a zero bid is Imperial Parking at Civic Center. The reason – Pacific Park Management currently oversees 11 garages; therefore they have greater access to funds necessary to create the lowest bid.

Currently, Japantown parking garage is run by a community organization: the Japantown Task Force in partnership with the Parking Corporation.

“There are only three Japantowns left in the nation,” Szeto cited as the reason that the Japantown Task Force has the contract.

MEDA has also accused the MTA of not sending a request for proposal to them. MTA representatives claim that there is a real estate division that has a mailing list, and MEDA is on that list. So, if they did not receive the notice there must have been an error from the time it was mailed and never received.

“We put our blood, sweat, and tears into that garage,” Safont said. “I’m very angry. We were told not to worry if we didn’t get the contract.”

Before MEDA began managing the garage, it was plagued with prostitution, drug dealing, and graffiti—Supervisor Ammiano called the area a “toilet.”

“Its very clear there is a bias here,” said Ruby Harris, MEDA’s Community Planning Manager. “We need to stop this from happening again.”

“This creates a monopoly,” said Luis Granados, Executive Director of MEDA. “There are different kinds of garages that need different management.”

Granados said that MEDA planned to create a community asset fund to put the money right back into the Mission community. MEDA works mostly with the Spanish-speaking community, providing small business and homeownership assistance. Supervisor Ammiano said that there needs to be way to count community benefit, and ensure that this sort of misfortune does not happen to any other community-based organizations.

MEDA tried to work out a compromise with Pacific Park, but they failed to meet because their lawyer needed to be present. Even when Supervisor Ammiano and the Mayor’s Office attempted to set up meetings, Pacific Park representatives never showed up.

The Mission community was on hand to voice their support. The committee heard from Renee Saucedo of La Raza Centro Legal, Salvador Duran of the Mission Credit Union, and Sam Ruiz of the Mission Neighborhood Centers.

This was not an active item on the agenda, because it would be misconduct to interfere with the outside process.