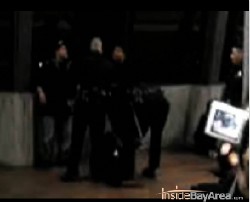 The videotaped shooting death of Oscar Grant by a BART police officer on New Year’s Day marks how far technology has advanced since the 1991 videotaped beating of Rodney King. The cell phone video recorded by BART rider Katrina Vargas shows that Grant was unarmed, and that he apparently was not acting in a manner that would compel an officer to consider using a firearm. Grant’s death was recorded by several other cell phone video cameras, and may have been recorded by BART security cameras. The videos were posted immediately on the Internet, where they were seen by thousands, if not millions of people before being picked up by the Mainstream News Media. The ongoing reporting of the Grant murder by everyday citizens armed with cell phones is a contrast to how the world learned of the King beating 18 years ago.

On the evening on March 19, 1991 Los Angeles resident George Holliday heard a commotion outside his window and pointed his newly purchased Sony Handicam toward what appeared to be a gang fight; upon zooming in Holliday realized he was recording a group of LAPD officers taking turns beating an unarmed Black man with billy clubs and metal flashlights. Holliday took the videotape to KTLA-TV, which aired the beating of Rodney King, and the rest, as they say is history. The King beating videotape was the first time that a televised video was used to document clandestine police abuse. Police officials defended previous televised police beatings of Vietnam era anti-war and Civil Rights protesters as a justified use of force, but few law enforcement professionals defended the officers videotaped beating King.

Over the decades thousands of people, particularly Blacks and other non-whites have complained about police abuse but until the King beating video, most police abuse charges were dismissed because police misconduct cases were usually based on the officer’s word verses testimony by victims and eyewitnesses who often were deemed not credible by prosecutors, judges and juries. The five officers charged in the King beating were found not guilty despite the tape clearly showing that King was unarmed and was not resisting arrest. That verdict sparked days of violence in LA and outrage throughout the country.

The New Year’s Day murder of Oscar Grant probably wouldn’t have been recorded 20 years ago. The Sony Handicam used to videotape the King beating, at a foot long and weighing more than two pounds, would have probably been too big and bulky for most people to casually carry around, especially on New Year’s Eve. Even if someone had a larger camera at the Fruitvale station on New Year’s Day, the camera would have been so conspicuous that BART police officers may have prevented a videographer from shooting the incident. Holliday was lucky that there was an assignment editor at KTLA willing to take a look at the King beating video and that it was a slow news day when Holliday called about the tape. If Holliday had called the station about the King video on the day of O.J.’s slow speed chase, the Northridge earthquake or when some other major LA news story was breaking, assignment editors would have probably been too busy to look at the King beating video.

Cell phones are so small and commonplace today that police often are oblivious to their presence and are unaware that most cell phones have the capability to shoot and instantly transmit still and video images. The women who recorded Grant’s shooting said that a BART police officer attempted to seize her camera, not realizing that content shot or recorded on many cell phones can be transmitted in a few seconds to other computers or the Internet. Today’s camera equipped cell phones are virtually everywhere because phones can easily fit in a purse, pocket or on a belt holder.

Before the invention of inexpensive camcorders in the 1980s, the only people who could get video on the air were TV news crews and freelancers who could afford the six figure video cameras, videotape and editing equipment required to produce “broadcast quality” video. The message behind the Rodney King video was that anybody with a camcorder could document police and public officials as long as someone was willing to put that content on TV or cable. Friends and relatives of Oscar Grant have used the multimedia tools of cell phone technology and the Internet to inform the world about Grant’s murder, to demand accountability not only for the officer responsible for Grant’s death, but for the BART Board of Directors, the public agency responsible for the BART Police.