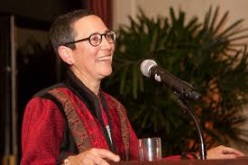 Barbara Brenner, former Executive Director of Breast Cancer Action and nationally recognized leader in the fight to end breast cancer, died at home on May 10, 2013 after a three year battle with Amyotrophic Lateral Sclerosis (ALS). Barbara was a dedicated political and breast cancer activist with a no-nonsense, creative, searingly honest and radical approach to breast cancer, ALS and her life as a person with a disability. A Noe Valley resident for decades with her life partner Suzie Lampert, Brenner was once described in the Noe Valley Voice as a “single-breasted dynamo.” It was a dynamism grounded in social justice, grassroots advocacy and civil rights that was evident until the very end of her life; a dynamism that positively impacted the lives of millions of women and men.

I met Barbara in the early 1980’s – we had both graduated from Bay Area Law Schools in 1981, both lived in Noe Valley, and travelled in overlapping circles. I have long admired her activism and boundless energy.

As a disability rights lawyer I appreciated her unbridled candor about living with a fatal disease and her fierce desire for as much independence as was possible at every stage of ALS. “ALS sucks,” she said in her Smith College oral history conducted in 2012, and she said the same thing about cancer. Yet she met the challenge of both with a political activism and savvy strategic know-how that never wavered.

Diagnosed with breast cancer at age 41, Barbara soon left the practice of law to take the helm of Breast Cancer Action (BCA) a Bay Area grassroots organization perhaps best known for causing all of us to rethink pink. Barbara is credited with coining the term “pinkwashing” to describe the monsoon of pink that drenches everything from cosmetics to football jerseys in the month of October, yet often promotes the very products that contribute to environmental hazards causing cancer in the first place.

Her tireless work with BCA helped change the debate about breast cancer in this country and beyond.

Barbara had to retire from BCA when she was diagnosed with ALS in 2010. But her activism did not stop.

Through her Healthy Barbs Blog she shared her ALS journey, spearheaded efforts to change FDA policies, and challenged medical equipment makers to listen to users like her. All while continuing her breast cancer advocacy. Brenner’s post titled Choices: How I live with ALS is a blueprint for anyone seeking independence in disability. And her final post, titled Thanks and Blessings, and written three days before she died, is a model for each of us at the end of life.

With breast cancer and ALS, life threw Barbara two tricky and challenging curve balls, either one of which could have limited her commitment to social justice and grassroots activism. But they didn’t. They fueled that commitment in new ways that leaves the world a better place. Peggy Orenstein’s tribute to Barbara calls her a “True Shero.” I couldn’t agree more.