Barack Obama’s on Our Side – But is He a Fighter? 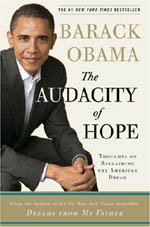 “Barack’s Senate record has been cautious – but he’s not a triangulator,” said an old friend of mine who used to work closely with Barack Obama and was one of his former students at the University of Chicago. “He’s always been an incrementalist, but has the right long-term vision,” said another friend from Chicago who has followed his career closely over the years.

Both of these people are leftists who wouldn’t say such kind words about Obama if they felt that a familiar politician had sold out after reaching the national stage. They’re answering a question that many progressives have about a politician who was unknown less than three years ago – who really is Barack Obama?

As we look ahead to the 2008 Presidential election, Obama is the fresh face that everyone is excited about. He gives us hope, even if we don’t really know much about what he stands for. As he plans to announce his candidacy on Abraham Lincoln’s Birthday, liberals are eager to know more about the guy to see if he’s the candidate to get behind – given the frightening prospect of a Hillary Clinton nomination.

Obama’s new book, “The Audacity of Hope,” offers some insights about who he really is – but I can’t say that I felt either assured or dejected after reading it. If you look beyond the optimistic and eloquent rhetoric that makes it an uplifting book to read, it’s still hard to determine whether Obama would be a visionary President like FDR who moves the country decidedly to the left – or just another Bill Clinton who will sell out for the sake of expediency.

I grew up in Chicago, and actually lived three doors down from Barack Obama – right when he was kicking off his political career with a run for the Illinois State Senate. I never knew him all that well, but I remember him as a staunch progressive who echoed the spirit of the late Mayor Harold Washington.

When he ran for the U.S. Senate in 2004, I fully expected him to be the next Paul Wellstone and was excited to support him when he was the underdog in a crowded primary. When I attended the Democratic National Convention in Boston, I made sure to get a floor pass on the night where he gave his historic keynote address that catapulted him into the national limelight.

But Obama’s record in the Senate has been a mixed bag for many progressives, and has surprisingly been more moderate than his Illinois colleague, Dick Durbin. He voted to confirm Condoleeza Rice for Secretary of State and supported the 2005 Class Action legislation.

He’s been a good vote against George Bush’s Iraq policy and for withdrawal, but we haven’t heard the sense of moral outrage from him that so many of us feel on a daily basis. And if you go to websites like Daily Kos, it won’t be long before you find leftists grumbling about how Obama spends his time lecturing progressives for being too harsh and too partisan in their dismay at Republicans and conservative Democrats.

From this mindset, maybe I was inevitably going to be disappointed with his book. “The Audacity of Hope” was clearly written in mind to prepare a presidential campaign, as there is very little that he says that anyone can possibly disagree with. Obama comes to many of the policy conclusions that progressives will be happy with — the Iraq War was a huge mistake, the government should not intrude on our sexual morality, there is no Social Security crisis, and we must address the widening gap between rich and poor – but he does it in a way that’s unnerving for any progressive outraged at the direction our country has been going. He’s obviously a liberal Democrat, but will he be a passionate progressive willing to take risks when Republicans will fight him tooth and nail?

Throughout the book, I found myself continuously frustrated by Obama’s deference to Republicans and the excesses of the Bush Administration — as he gives the opposition a certain aura of credibility that they simply do not deserve. As he discusses the Senate debates over the President’s “war powers” to combat terrorism and the Republicans’ manipulation of the Terri Schiavo affair, he writes “as much as I disagreed with [their positions], I believed they were worthy of serious debate.”

What you don’t get from his book is a sense of outrage that the political spectrum has moved so far to the right that we are today debating questions that were called insane twenty years ago. As Obama himself even admits, “by nature I’m not somebody who gets real worked up about things.”

A more charitable view is that Obama is an eternal idealist who longs for a time when political opponents can disagree without being disagreeable – as he deplores the partisanship that plagues Washington. To his credit, he points out that Republican partisans are worse because they are the ones who control the levers of power (note: he wrote the book prior to the November 2006 elections.)

But according to Obama, what plagues our nation today and makes us divided between “blue states” and “red states” is excessive partisanship and narrow-mindedness on both sides of the spectrum – as opposed to a President who feels that he needs to listen to nobody, consolidate wealth to his very rich friends, and shred away our last civil liberties.

Obama’s on our side — but there’s one thing that you can really tell from reading his book: he is cautious to a fault. And that’s not the Obama I remember.

In 2000, Obama ran for Congress in the Democratic primary against Bobby Rush, an incumbent who had served for about a decade in the House with very little to speak of. Rush had a good voting record, said Obama, but a Democrat who represents a safe district on the South Side of Chicago should be pro-active and a true leader for progressive causes. It takes courage to run against an incumbent in your own party and make such a case, and at the time Obama impressed me as being willing to buck the establishment.

Obama repeatedly talks about his run for Congress in his book – but it’s clear that he’s not proud of what he did. He entered the race without first commissioning a poll (a mistake that he says he’ll never make again), only to later find out that the incumbent had a 90% name-recognition and a 70% approval rating.

“Less than halfway into the campaign,” he writes, “I knew I was going to lose. Each morning, I awoke with a vague sense of dread, realizing that I would have to spend the day smiling and shaking hands and pretending that everything was going according to plan.” Obama went on to lose that race by thirty-one points, a defeat that he admits still burns him to this day.

I didn’t enjoy “the Audacity of Hope” as much as I liked Obama’s earlier book, “Dreams From My Father” – which talks about his upbringing to a Kenyan father and a white mother, and his childhood spent in Hawaii and Indonesia. Written more than ten years ago when he was not contemplating a run for President, it gives you a much clearer idea of who Barack Obama really is than this latest book.

Maybe as a San Francisco progressive I was supposed to get frustrated at “the Audacity of Hope” – that Obama’s deference to Republican views and talk about excessive partisanship was just rhetoric that every presidential candidate is obligated to say.

What I can say about the book is that it didn’t change my opinion about Barack Obama. He’s a cautious liberal who would make a better president than John Kerry, Al Gore or Bill Clinton. And given the sorry state of our country these days, I’d be happy to support him for President in 2008 – I’m just not expecting him to be the best President ever.