Barack Giveth, But Arnold Taketh Away 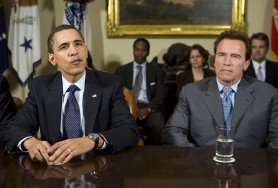 President Obama’s stimulus bill provides long overdue federal funds to communities facing hard times, but San Francisco will lose virtually all its money from Washington to Sacramento. The City will receive an extra $92 million in federal money this year, but the state has already cut $62 million from what it gave last year. And with Governor Schwarzenegger pushing a “cuts-only” budget to address the state’s shortfall, things are only likely to get worse. Mayor Newsom’s proposed budget set aside $25 million to plan for future state cuts, but the total damage could be more like $200 million. Nearly all federal gains to the Human Services Agency have already been cancelled out by state losses, without counting Arnold’s new proposal to eliminate Cal-Works (which would cut another $100 million out of that department.) Sacramento could decimate the City’s Health Department, and it has already killed public transportation funding. Not only does this mean that advocates must fight for every cent in the City budget, but it forces us to pay close attention to what’s happening in the State Capitol.

Obama brought hope to our country after decades of despair, but for Californians – who enthusiastically backed him by a wide margin – the federal stimulus won’t amount to much. That’s because we have a two-thirds requirement in the State Capitol to pass a budget, a shrill minority of Republican legislators who refuse to vote for a single tax increase, and a lame-duck Governor whose legacy will be driving the state to bankruptcy. The Obama Administration will be sending money to San Francisco, but Schwarzenegger will be taking most of it away.

Take the budget of the City’s Human Services Agency. It’s bad enough that Mayor Newsom has proposed slashing $24 million in General Fund dollars, which means that for the first time it would get less than the Fire Department. The feds are giving it an extra $20.8 million this year, but the state has already cut $17.7 million – a “net gain” of only $3 million. Now, Schwarzenegger wants to end Cal-Works aid to families, slash payments for IHSS (in-home supportive services) even further, and eliminate the cash assistance program for immigrants. The City already “back-filled” cuts to IHSS after the state budget passed in February. Absorbing these additional cuts would cost Human Services a whopping $114 million.

The Department of Public Health got an extra $37 million in FMAP (Federal Medical Assistance Percentage) funds this year, but the state also cut $14 million. Now it stands to lose 19 of the $23 million “net gain,” if Arnold has his way. The Governor wants to eliminate the Healthy Families Program, which would mean 12,000 uninsured children in San Francisco – unless the City pays for it out of its own budget. Schwarzenegger also wants to reduce AIDS drug assistance program (which literally saves the lives of patients), Medi-Cal reimbursements for drug treatment and skilled nursing facilities, and kill funding for Prop 63 substance abuse treatment. Keep in mind that Newsom already plans to cut about $100 million of the City’s Health budget. Can we afford to lose any more?

The good news is that apparently Schwarzenegger has backed down on “borrowing” up to $2 billion from local governments to pay off the state deficit. The bad news is that he wants to steal part of the state’s gasoline tax revenue which goes to local government – to pay the “debt service” caused by all his financially reckless schemes of the past six years. The Department of Public Works – the one major City agency that hasn’t yet seen budget cuts from Sacramento this year – could lose $13 million. Arnold’s plan would also take $3 million out of the Metropolitan Transportation Agency.

Speaking of public transportation, the City passed a Muni budget last month to plug a $129 million deficit – by raising bus fares and cutting service. Muni’s “state of emergency” did not happen by accident. A large chunk of this gap happened after the Governor eliminated STA funds, which provide the bulk of state funding for public transit. The MTA did receive $67 million in federal stimulus funds, but most of it went to “shovel-ready” capital projects (whose benefit won’t be seen for years) – while our “transit-first” city can’t afford to keep most of our buses running.

All told, the City and County of San Francisco is getting an extra $92 million in federal funds this year – most of it from the American Recovery and Reinvestment Act (ARRA). But due to the shenanigans in Sacramento, our state funding has taken a $62 million hit – negating more than two-thirds of what we got from the Obama stimulus. If the Governor and state legislature pass a “cuts-only” budget as they keep threatening, City Controller Ben Rosenfield says we could lose up to $200 million. Mayor Newsom’s budget proposal put aside some money if the state makes more cuts, but only $25 million. Any way you look at it, it will be a disaster.

Back in San Francisco, the Board of Supervisors is considering changes to the Mayor’s budget. The Firefighters Union (who have Newsom consultant Eric Jaye on retainer) are planning a rally tomorrow in front of City Hall against a Board proposal to cut the Police, Fire and Sheriff budgets. Newsom’s plan increases the Fire Department budget, but some Supervisors believe that every department must “share the pain.” Meanwhile, the Coalition to Save Public Health – a group of non-profit and City workers who provide front-line health and human services for the poor – will have their own rally across the street at 12:30 p.m. Many of these groups are facing budget cuts.

At the end of the day, however, everyone at the local level is fighting to minimize devastating cuts that are inevitable. The real fight is in Sacramento, and advocates must pressure the Democratic leadership to insist on revenue solutions (like an oil severance tax, or restoring the income tax for high wage earners to Reagan-Wilson levels.) State Senate President Darrell Steinberg and Senator Mark Leno are hosting a live Internet townhall tonight on the state budget at 6:00 p.m. Submit your questions at Leno’s website, and if you’re in front of a computer this evening you should watch.

Democrats have their back to the wall in Sacramento, and they need support just to keep pushing harder. But we will never truly resolve this mess until the voters pass a constitutional amendment eliminating the two-thirds requirement to pass a state budget. This is what has blocked progress in the state, and has given us a Mississippi budget. That’s why the answer I want to hear tonight is what political strategy the Democratic leadership has to make this change a reality. We must generate mass public outrage to get rid of it.