by tiny and Tanya Lee/PoorNewsNetwork on January 27, 2006 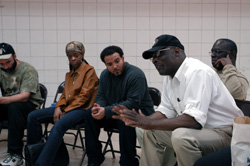 Legislation recently passed in San Francisco that takes another step towards ending the rampant discrimination and criminalization of poor folks in Amerikka. “Its been a good morning, ‘cause we are ending the rampant discrimination that formerly incarcerated people face when they apply for a job, ” shouted Dorsey Nunn from All of Us or None from San Francisco’s City Hall steps. “As well as every time they apply for housing, for student loans and for benefits when they apply for an opportunity to live again.”

The roar of triumphant words rolled out of Dorsey’s mouth at a press conference on Tuesday celebrating a new piece of legislation that would “ban the box” from every application in the City and County of SF. The “box” that appears on every City and county job application as well as housing, financial aid and welfare applications. The “box” that asks you if you have ever been convicted of a crime. I know that box well and as he spoke of today’s triumph, I reflected on my life inside the confines of the “box” and its power to keep me jobless, houseless, and poverty-stricken for many years of my life.

“We are announcing a historic victory today and this is how it will work,” said the next speaker on this crisp January morning, Linda Evans. Evans is an organizer with All of Us Or None, a project of Legal Services for Prisoners with Children. “On every application for employment in the City and County of San Francisco there is box that asks: Have you been convicted by a court? In which you are required to list any convictions, misdemeanors , felonies, traffic violations.”

Linda went on to explain that under this new legislation the box is gone and people won’t have to disclose that information unless they are selected as a finalist for a specific job. And when they disclose that information the only convictions that can be considered are ones that are directly related to job responsibilities of their new job. Furthermore, they will be allowed to explain those convictions in an interview as part of the finalist process and if they are not chosen and they believe that their convictions played a part in that decision they can appeal to the human rights commission.

Linda broke down the powerful community effort to make this happen that included formerly incarcerated folks working in tandem with conscious legislators such as Ross Mirkarimi, Chris Daly and Public Defender Jeff Adachi.

As a child and young adult raised in a homeless family, I became permanently locked into the vicious jaws of poverty which culminated in me getting cited, arrested and incarcerated. Incarcerated, for what I call crimes of poverty. Arguably most crimes in our Amerikkkan UN-justice system could be called crimes of poverty, but in my story I am talking about the crime of being homeless.

Because of the “box” I remained in poverty and was forced in many cases to lie or get involved in some form of unrecognized, criminalized labor. Labor that put me at risk of being thrown in jail again.

” What you don’t see in the press is that the recidivism rate is extraordinarily high,” said SF board supervisor and co-sponsor of the legislation Ross Mirkarimi. “Why do we erect so many barriers for folks who are trying to integrate back into the work force?”

“I am still homeless because of that “box.” They have the ‘have you been convicted of a crime question’ on all housing and Section 8 applications,” said a 28-year-old mother of two who is a writer and actress with welfareQUEENS, a play and movie production which I launched with POOR Magazine and SF City College’s Family Resource Center to bring voices and truths to the increasing criminalization and system abuse of poor families in Amerikka.

As more and more people become impoverished in this country due in part to “natural” and intentional disasters like Hurricane Katrina it is very important to resist and actively work against the increasing criminalization of poor folks that is happening in our US corporate-ized cities. Resistance like the “ban the box” efforts need to happen everywhere.

“This is step one we are going to cities and counties all over California, LA, San Bernardino and on and throughout the United States. We are determined to take that box off all job applications!,” Linda concluded to huge cheers from the crowd of community allies and support members such as Project Rebound, California Coalition of Women Prisoners, Ella Baker Center for Human Rights and School Board member Eric Mar.

“I am shocked that it took us this long, we are damn near begging to go to work,” said Jason Bell from Project Rebound.

I barely made it out of that “box” alive. Now I dedicate my life to resisting the racist , classist conditions faced by children and families trying to survive and thrive in and out of all the “boxes” in Amerikka.

To get more information on the Ban the Box campaign call All of Us or None at (4154)255-7036 x337. To get involved in the welfare QUEENS play and movie call (510)435-7500. To read more journalism on issues of poverty and racism by the folks who experience it first-hand go on-line www.poormagazine.org