Ballot Measure to Stop MLK Widening On the Way 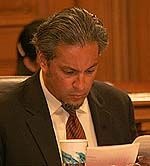 Efforts to stop the construction of an underground garage at Golden Gate Park look bleak, but efforts to stop the widening of Martin Luther King (MLK) drive from two lanes to four look promising as activists work with Supervisor Ross Mirkarimi to get a new measure on November’s ballot. The proposed legislation is one that would prohibit any additional auto lanes. On the other hand, it would allow for cars inside the Park by opening up the Music Concourse’s south entrance as an access route. The proposed measure still is being finalized and will be introduced to the Board of Supervisors in August.

Executive Director Michael Ellzey of the Golden Gate Park Concourse Authority (GGPCA), formed to oversee construction of the garage, said, “The thing is, the design they’re proposing is the one we had intended for the Park all along, the one they sued us over.”

“We felt we had to cut our losses,” admitted activist Chris Duderstadt, vice president of the urban environmental organization, San Francisco Tomorrow. In December 2004, Duderstadt, along with Stephen Willis of the public interest, legal defense committee, Save Golden Gate Park, filed a lawsuit to stop the intra-Park entrance/exit.

“If we lose on this, we lose everything,” agreed John Rizzo, executive chair to the Sierra Club, San Francisco Bay Chapter.
Rizzo, who also is one of seven members on the GGPCA’s Board of Directors said, “We’ve talked with many attorneys and have discovered that there’s no ordinance to make the lanes go away; our only option is to go the ballot.”

He explained reasons for opposing the widening include the invasive access to open area, the reduction of free-parking spaces, and the potential hazard to bicyclists and pedestrians due to faster moving traffic.

“I’ve been searching for a way to overturn the widening since the day after we voted on it,” he said, and explained that the GGPCA and the Recreation and Park Commission gave final approval to the plan in November 2004.

Nearly six years earlier, in 1998, voters approved Proposition J: The Golden Gate Park Revitalization Act, which allowed for construction of an underground garage in the Concourse area of the Park between the M.H. de Young Museum and the California Academy of Sciences. In return for their consenting to the garage, Proposition J promised voters the creation of a “pedestrian oasis in the Concourse area,” and steps taken “to reduce the impact of automobiles in the Park.”

The legislation also stipulated that the garage would be constructed within or near the Concourse “with a dedicated entrance and exit (or entrances and exits) outside of the Park.” However, both the Golden Gate Park Concourse Authority (GGPCA), formed to oversee construction of the garage, as well as the City, approved an intra-Park entrance/exist anyway.

In August 2004 Superior Court Judge Warren held that such an entrance/exit inside the park violated Proposition J and he ordered that it be re-analyzed and re-designed. Proposed widening of MLK drive from two lanes to four, with the two curbside lanes providing the required “exclusively dedicated entrance” for cars, was the GGPCA’s answer to that order.

“All we’re doing is implementing the will of the majority,” Ellzey insisted as he reminded Beyond Chron and readers that voters approved Proposition J 57 percent to 43 percent.

“And whenever you try to implement the will of the majority at least some of the minority is going to disagree.”

In this case, the minority includes Duderstadt, who revealed that if the Board of Supervisors approves the proposed ballot measure, $30,000 of the settlement he and Willis received from their lawsuit will go toward supporting it.