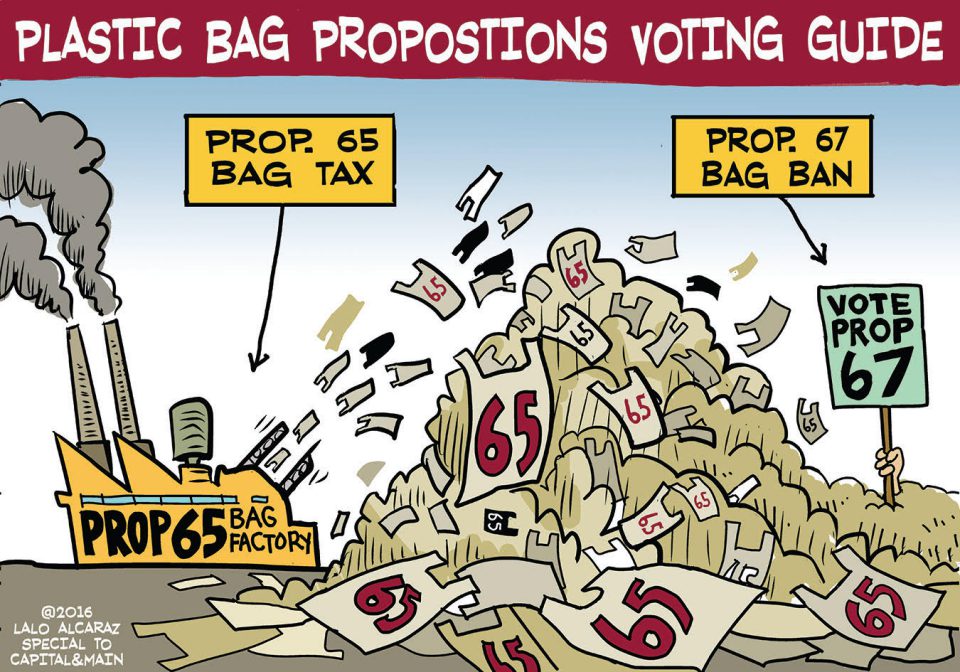 When the tiny, picturesque community of Bisbee, Arizona, decided to ban single-use plastic bags in 2014, leaders in the plastics industry worried Bisbee had sparked a trend. Other Arizona cities—Kingman, Flagstaff, Tempe—were considering similar restrictions; soon, the bag makers feared, the whole state would fall. So they did what corporate lobbyists do in a reliably conservative state: They persuaded legislators and the governor to declare bans like Bisbee’s illegal.

Next door in deep blue California, where more than 150 local jurisdictions have already banned the bags, defending the market sector of the single-use plastic bag has proved altogether more complicated. Sixty percent of polled Californians say they support a plastic bag ban; rescinding the existing bans would be impossible. So instead the industry put its muscle into holding off a statewide ban.

For a while, it succeeded. Assemblymember Julia Brownley authored a bill in 2010 that would have outlawed single-use carryout bags of any material; it failed in the Senate after the Virginia-based American Chemistry Council worked hard to defeat it. But in 2014, State Senators Alex Padilla, Kevin de León and Ricardo Lara collaborated on a less restrictive law, one that would ban most plastic bags but allow grocery stores to charge 10 cents for each paper replacement. It earned the support of the California Grocers Association, and eventually the United Food and Commercial Workers union. It allows for the continued use of thicker plastic bags that will last for 125 uses or more and directs $2 million in loans to job creation in the recycled and reusable grocery bag industry. In August of that year, the bill made it all the way to the governor’s desk.

So the bag lobby pursued its last available option. Before 2014 was out, the plastics lobby had collected enough signatures to place the plastic-bag ban, Senate Bill 270, on hold and put it to a referendum on the November 8, 2016 ballot.

“Our contention is that it’s a special-interest giveaway to grocers in the state,” says Jon Berrier, spokesman for the American Progressive Bag Alliance, a consortium of mostly out-of-state plastic-bag manufacturers and an offshoot of the American Chemistry Council. “It bans a 100-percent recyclable product produced in America with American labor, that according to the U.S. Environmental Protection Agency accounts for only 0.3 percent of the waste stream.

“The idea that you’re going to reduce waste or litter banning plastic retail bags,” he says, “is simply false. Sacramento special-interest politics threw data and science out the window.”

Berrier is right that plastic bags account for only a small percentage of our garbage. (The vast majority of it is paper, yard trimmings and food.) But single-use plastic retail bags are a singularly pernicious kind of trash. Easily airborne, they float away from conscientious neatnik and litterbug alike, to find their way into mountain streams, storm drain culverts, ocean gyres and, eventually, the gullets of marine animals from cetaceans to sea birds. Sea turtles mistake them for jellyfish and suffer excruciating deaths by starvation; pelicans spear through them and strangle. On a recent paddle down the Los Angeles River, I saw white plastic bags clinging to the trees; my fellow kayakers playfully dubbed them “grocery-bag flowers.”

Plastic bags can be recycled at special, dedicated facilities, but you can’t just toss them into a blue bin. Sent to ordinary processing centers, they clog up sorting screens and have to be cut out with hook knives and saws. They don’t degrade, but disintegrate, turning ocean and freshwater into a diluted chemical soup.

But they are also big business, earning their manufacturers $100 million to $150 million every year in California alone. The short list of generous contributors to the No on 67 campaign contains only one in-state individual or company, Durabag of Tustin, California, which contributed a mere $50,000 early on. The rest of the donors list consists of out-of-state companies whose futures depend on the persistence of their industry: Advance Polybag of Sugar Land, Texas ($946,833); Formosa Plastics of Livingston, New Jersey ($1,148,441); Hilex Plastics of Hartsville, South Carolina ($2,783,739); Superbag of Houston, Texas ($1,238,188).

It has already been money well spent, and not just because a victory in the nation’s bellwether state could set a trend, while a loss could spread bag bans like a virus. As the San Francisco Chronicle reported, simply by delaying Padilla’s bill for 18 months, the industry has bagged $15 million in profit.

Steve Maviglio, a spokesperson for the Yes on 67 campaign that supports the ban, says that the plastics lobby’s concern over the predicted job losses rings hollow, considering that almost no single-use plastic bags are made in California. The thicker plastic bags allowed in Padilla’s law will, on the other hand, add to the state’s manufacturing economy, adding several hundred jobs. The plastic industry’s claim of 2,000 jobs lost “is incredible and nonsense,” Maviglio says.

The plastics lobby could, however, win this one—not least because the wording of the referendum on the ballot is confusing. “It’s not intuitive that we need to vote ‘Yes’ for the law to go into effect,” says Diz Swift, a member of the League of Women Voters in Berkeley. “People might say, ‘Oh, no, I don’t want the law vetoed, I want it to go into effect,’ and mistakenly vote ‘No.’” (To be clear, a “No” vote on Proposition 67 will overturn the bag ban; a “Yes” will uphold it.)

Even more confusing is that the plastic bag alliance has put another proposition on the ballot – Proposition 65 – that would direct the 10-cent bag fee toward a special wildlife conservation fund. Berrier says the measure came out of the bag alliance’s research. “Only 25 percent of the people we asked had any idea where that 10 cent bag fee would go,” he says. “A lot of people thought it was going to the environment, or to local government.” When they find out it’s going back to the grocers, he says, “They’re outraged. They want it to go to an environmental purpose.”

To Swift, however, putting Proposition 65 on the ballot above Proposition 67 is a blatant attempt to skew the vote. Only the most sophisticated and well-informed voters will understand what it all means. “The money goes into a fund that sounds really good,” she says. “It’s for drought mitigation, clean drinking water, regional parks, litter removal and habitat restoration. But it requires creating a bureaucracy that doesn’t really help.”

Maviglio is more blunt. “We call 65 the Screw the Grocers Initiative,” he says flatly. “They’re trying to send a message to grocers in other states who would hop aboard a statewide ban.” Single-use bags cost grocers anywhere from six to 16 cents per bag, “and that doesn’t include delivery and stocking,” Maviglio claims. “There’s no windfall there.”

If that’s not persuasive enough, he asks voters to consider the source. Prohibitions against plastic bags have been carried by the most grassroots of efforts—community organizations, moms, local environmental groups. The Arizona ban on plastic-bag bans, he says, comes straight out of the American Legislative Exchange Council, a think tank that assists corporations in state lawmaking, with an emphasis on preempting local control.

“The plastics industry has no regard for the environment,” Maviglio says. “It would be hypocritical of them to put something on the ballot to help wildlife.”

To be fair, Berrier doesn’t argue that helping wildlife is the point: The goal of Prop 65, he says, is only to highlight where the bag-fee money goes after grocers collect it.

“The language is very plain and simple,” he insists, “and it will have its intended effect.”