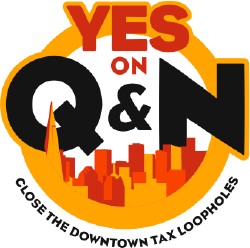 These are tough times. Everywhere families are looking over their finances, trying to cut back and cut corners so they can get by. But at some point there’s only so much you can eliminate before you start getting into essentials like food, medications, heat. Then you have to look at other options to bring in more money—perhaps an odd job here, a garage sale there, maybe try to get a raise at work.

The city of San Francisco is at that point. For the last few years we have been facing deficits, not taking in enough money to pay for the services residents expect and deserve. Each year, the Mayor and the Board of Supervisors perform a ritual bloodletting, trying to cut that increasingly elusive fat and inevitably scrapping deeper into bone. It’s time for some creative ways to find more money.

To their credit, the Board of Supervisors, weary of the annual budget battles and the recently added mid-year budget cuts, have stepped up. With the support of the city’s unions and community organizations, the Board has placed a couple of propositions on this November’s ballot that can bring in some badly needed dollars. They do it by closing loopholes in the city’s tax codes that has let some moneyed interests get away with not paying their fair share.

Proposition N will increase the real estate transfer tax, the fee paid to the city upon the sale of property, from .75 percent to 1.5 percent on properties worth $5 million or more. So it would apply only to commercial property or super luxury homes—99 percent of the city’s residential homes would not be affected.

Multinational corporations have been using shell companies and accounting gimmicks to game the city’s tax system and avoid paying the transfer tax. These corporations rely on the city’s transit, public safety and infrastructure and yet do not pay their fair share, leaving more of a burden on the rest of us. Prop N closes the loophole.

Proposition N will also create incentives for solar power and seismic improvements by reducing the regular transfer tax by up to one third for properties that have had those types of improvements. All together Prop N will bring an estimated $29 million per year to the city.

Proposition Q closes another loophole in the city’s tax code that has allowed owners of partnership businesses—like law and accounting firms—to avoid paying the 1.5 percent payroll tax that other businesses pay. Some of these companies have evaded the tax by paying their “partners” a share of the firm’s annual profits. Prop Q will require the payroll tax be paid on all their compensation except returns on investment.

At the same time Prop Q helps small businesses, the backbone of our local economy, but raising the limit for exemptions to the tax and then continuing to raise that ceiling along with inflation. This will allow small businesses to hire more people and expand benefits for them.

There is no organized opposition to Prop Q and it was placed on the ballot by a unanimous vote of the Board of Supervisors. It will bring the city an estimated $17 million per year.

Proposition O was placed on the ballot by a unanimous vote of the Board of Supervisors to keep a new hole from being blown in the city’s budget. It will continue the Emergency Response Fee tagged onto your phone bill to fund the city’s 911 system.

A recent California Court of Appeals decision ruled that the 15-year old fee is actually a tax that requires voter approval. Prop O will grant that approval without changing the amount charged—there is no new tax increase involved.

Prop O will also update the current Telephone Users Tax to apply to new “telephone communications services” such as voice over internet protocol (voip) services. It will leave the tax at its current level and continue its exemptions for low-income residential landline users.

Prop O will continue to bring in approximately $82 million a year to fund the 911 emergency response system. If it doesn’t pass, the service will be reduced or have to be paid for out of the general fund that is already running a deficit. That is why Prop O is supported by all the city’s first responders, the San Francisco police, sheriffs and firefighters.

These measures alone will not solve all of San Francisco’s fiscal problems. But they are a good start towards balancing the budget and balancing the burden. Vote “YES” on Propositions N, O and Q.

Damita Davis-Howard is the President of SEIU Local 1021.