Back in San Francisco: The Return of the Orange Peels 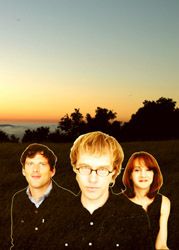 With the departures of their original guitarist Larry Winther to build his new home in Kalama, Oregon, and drummer John Moremen to sessions with Eric Brace’s Last Train Home and MX80, the founders and pop-stylings of singer/guitarist Allen Clapp and bassist Jill Pries of the Orange Peels still remain. Many groups do not survive the departure of such talented musicians, however Clapp continues with the duo’s latest and perhaps best effort, “Circling The Sun”. Reunited with producer/drummer Bryan Hanna, and the Ocean Blue’s guitarist Oed Ronne, Clapp and Pries return with the same vigor and energy that has made the Orange Peels one of the best pop groups in the Bay Area.

From their Sunnyvale Eichler home, Clapp alongside Pries, produced the band’s first two albums, “Square” (Minty Fresh) and “So Far” (SpinART). These truly were the groundwork for their newest effort, and the foundations were indeed well laid. The orchestral soundscapes of “Circling the Sun” are a unique departure from their previous CDs, giving this album an unexpectedly much fuller sound.

Taking cues from the terrestrial and the celestial, the band’s third album is both more earthy and spacey than its past works. It’s the sound of a band that has matured, and as King Crimson guitarist Robert Fripp once fondly said of drummer Bill Bruford, “He still retains a loss of innocence without giving way to cynicism.” This trait shows in Clapp’s songwriting and vocal arrangements, echoing for example in his “lyrical preoccupation with the weather and the cosmos”, in Circling the Sun. It’s also evident in Pries, whose funky and melodic bass lines helps to propel the Orange Peels. Despite the ups-and-downs of leading a group, Clapp and Pries remain ever the musical optimists.

The addition of Chicago’s Oed Ronne of the Ocean Blue, a multi-instrumentalist who joined the band in late 2002 on lead guitar and keyboards, has added to the chemistry. While Winther’s guitar work, (like on my beloved “Back in San Francisco” from So Far), will be missed, Ronne doesn’t disappoint. His talents were evident when I happened to catch the Orange Peels opening for the Ocean Blue in Baltimore a few years ago, and later as he joined Clapp on his solo tour at the club Iota in Northern Virginia. The band also apparently has “broken free from it’s garage”, to work with producer Bryan Hanna, who also collaborated on the band’s debut CD, and recording in the world-class acoustic spaces of the new Terrarium in Minneapolis.

Although drummer Moremen left the group during the early stages of Circling the Sun, Clapp has benefited from using three different drummers to complete the album, Peter Anderson of the Ocean Blue, who rejoins his band mate Ronne on “So Right,” and “Long Cold Summer”. Hanna plays on “Something in You” (my personal favorite), and “Circling the Sun”. The Orange Peels’ original drummer Bob Vickers also returns to play on “California Blue” and the album’s closing number, the laid back “How Green the Grass”.

Clapp is a true pop-smith, and if the Orange Peels suffer from any thing, it may be that they were born at the wrong time. No matter. For those of us that can remember those “thrilling days of yesteryear,” the music of the Orange Peels is timeless, and for those of us who can’t, they remind us of what it may have been like, to be back in San Francisco. Groovy man!

The Orange Peels will be performing tonight at the Pop Crush Festival at the Rickshaw Stop in San Francisco.