‘Awe About Eve’ Has Some Awe Moments 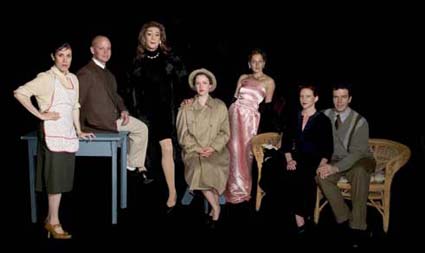 The movie “All About Eve” starring Betty Davis became a cult movie. People still use the famous line – “Fasten your seat belts – it’s going to be a bumpy night” uttered by Davis at a party. Now comes a play that is reportedly based on the original screen script. The twist here is that the star Margo Channing is played in drag by a man. A really, really tall man, at that. Just at the movie did “Awe About Eve” tell the story of an aging Broadway star (Margo Channing) who becomes the victim of an ambitious young actress who schemes her way into Channing’s world by pretending that she is so shy and innocent of the ways of the world.

She even concocts a phony story about her family and the hardships that she had to endure. This is backstage stabbing at its most shivering deliciousness. The younger actress manages to topple Channing off her star throne – and replaces her in a new play from the same playwright who has always written for the aging star. Hey, it still happens today. It doesn’t have to be on the stage either – it can be in your office, a restaurant you work at or even if you are a tree trimmer. There is always someone who wants to knock you off you pedestal – and they are always younger and cuter.

The only puzzling thing about this production is whether it is camp or serious drama. Everyone in the cast seems to be taking it pretty seriously. Even Matthew Martin (Margo Channing) seems to be playing it by the book. My guess is that the meant to play it straight – so to speak, with the caveat that the star would be in drag. Given the fact that Theatre Rhino puts on mostly Gay fare – this hook is not surprising. In a way it gives it that extra edge. After all, many old boozed up stars are probably closet lesbians or closet drag queens. Male or Female.

The cast is pretty much perfection. There is Birdie Coonan, the cynical personal assistant to Miss Channing. Played by Floriana Allesandria. Her remarks light up the stage. David Bicha plays Channings boyfriend. He’s good – but Channing’s height kinda dwarfs him. You just sort of visualize him crawling from one end to the other. Jeffrey Hartgraves (no relation) plays a producer/agent. Matthew Martin (Margo) also plays the mover and shaker Addison DeWitt, a sarcastic person who uses everyone to his own ends. The entertainment industry is loaded with them. Then there is Karen Richards (Libby O’Connell) who purposely drains gas out of the car to make sure that her best friend Margo misses the night’s performance. You know what they say “With Friends like that..” The most extraordinary performance of the evening was that of Maryssa Wanlass (Eve Harrington.) She played the cunning “bitch” so well that I began to really hate her. Imagine that – me, that never has an unkind word to say about anyone, actually wanted Eve to fall off the stage. Lloyd Richards played by Matt Weimer seemed believable as the Playwright who also falls into Eve’s trap. Oh, men are so fools – especially when someone younger than them selves comes along. And here is the most curious thing about this show Matthew Martin plays dual roles. First he is Margo, the star, and in the second act he makes an appearance as Addison DeWitt. The amazing thing about this is that Martin, who is a man, looks better in men’s clothes. He is quite striking – and shows great range as an actor. The program says this: ‘This performance is based on the unabridged film script by Joseph L. Mankiewicz. Many scenes deleted from the film are performed here for the first time’. It is longer but I didn’t see much new material, but the play is a class case of emotion. “Awe” runs through July 18. Directed by John Fisher and Matthew Martin.

MOVIN’ OUT, MOVES YOU

There are three elements to the dance musical Movin’ Out. The dance is the vehicle on the stage as the audience watches friends go through the stages of life. First it is post-World War II, then the Vietnam War when the friends enlist and the subsequent tragedy of losing one of them on the battlefield. No unlike what is going on today decades later. Then the homecoming, strained relationships and ultimately – reunion. Friendships survive love lost, love found, love renewed and friends lost.

The stories are all told through Twyla Tharp’s direction and choreography and about two- dozen Billy Joel’s hit songs. The main characters actually are taken from Joel’s lyrics. There is Brenda and Eddie in “Scenes from an Italian Restaurant.” Tony and Sergeant O’Leary from “Movin’ Out,” Judy from “Why, Judy, Why” and James from “James”.

The show is all dance and music. There is no dialogue to speak of except for a few words between Eddie and Tony. Opening night Eddie was played by Ron Todorowski, Brenda by Holly Cruikshank, Tony by David Gomez, Judy by Julieta Gros, James by Matthew Dibble and Sergeant O’Leary/Drill Sergeant was Jason DePinto. Piano/Lead Vocals were by Darren Holden, who is fabulous by the way. What talent – he blew the paint off the walls. I’ll be honest with you. This is a hard show to review. First of all the stories are told through dance. You have to be there to understand the emotion that is going on. You can’t describe these feelings on paper. Is it outstanding dancing? You bet! It couldn’t be any better. This cast is mesmerizing. They are trained dancers in many dance fields – and they all have rock solid bodies that seemingly flow weightless from one scene to another. What magic, and what pleasure to see this much talent in one evening. How they do it is beyond me. It is hard to pick out the best, but three really got to me on an emotional level. They are David Gomez, Ron Todorowski and Holly Cruikshank. Movin’ Out is passionate and powerful. The audience leaped to their feet to give a standing ovation. My advice: Move your butt – and get down to the Golden Gate Theater to see this amazing interpretation of Billy Joel’s music.

Rent the musical is still one N.Y’s Broadway. Joining the cast if Jai Rodriquez (Queer Eye for the Straight Guy) Jai will be seen as Angel from July 5-17 in the rock musical based on La Boheme. The story is about landlords and renters – and how in the hell can we pay the rent? Peter Krause, the hunk from “Six Feet Under” is in Arthur Miller’s play “After the Fall”. Deep stuff.

Rumors are drifting: One rumor is that there might be a musical production of “The Hunchback of Notre Dame. Makes sense to me. Another musical just dying to get made – is the “Portrait of Dorian Gray”. And yes, I am willing to take the part of the guy whose picture gets old but he doesn’t. As a matter of fact – I have a portrait in my closet right now for that very purpose. .Dirty Blonde has opened in London with the original Dirty Blonde Claudia Shear. That’s nice – but nothing or no one can ever compare to the production that was at the New Conservatory Theater this year. Far superior to Shear’s version. Hank Azaria & David Hyde Pierce joins the Spamalot cast in New York. Hey, that’s where they belong – after all Pierce has to do something now that Frazier has folded.

STARS, STARS, STARS. Don’t forget the star-studded show “Help is on the Way” at the Palace of Fine Arts in August. Tix are going fast for this show of shows. And the proceeds go fight Aids. I see it every year – and have never been disappointed. As Metro Goldwyn Mayor used to say “There are more Stars in this show than there are in heaven.” You can bank on it!!!

Love Letters and Hate mail can be sent to: leehartgrave@aol.com

David Gomez from Movin’ Out. Photo by Joan Marcus