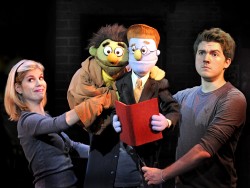 AVENUE Q – NOT FOR KIDS

The happy go lucky cast do two (or more) vocal parts. They are so irresistible, that you will find yourself humming and singing the tunes during intermission. Even when I left – people were humming the songs on the street. Yeh – it’s catchy, hip, wicked and amazingly funny. All the songs are wicked parodies. Here is a sample lyric: “You Can Be as Loud Hell As You Want When You’re Making Love”? Keep in mind this isn’t Sesame Street — it’s Avenue “Q.”

Every song has a message. Here’s one that everyone loved: “It’s O.K. to be Gay.” Most musicals have pointless contrived words. Not so with Avenue Q. The songs have meaning important to the individuals on the stage. They’re never dull moments — but there are some gross-out moments. Even puppets have simulated sex on stage. And the centerpiece of the show is the hilarious mockup of Actor Gary Coleman.

The score is groundbreaking gleefully bawdy early pop rock music. One of the most fantastic puppets is “Lucy the Slut” who turns to religion. Yes, she does a complete turn-a-round. So to speak.

It’s fast paced enough to make you think that you are on a crazy, charming roller-coaster ride! This tart, terrific musical is the funniest I’ve seen in years.

WHAT WE’RE UP AGAINST AT THE MAGIC THEATRE

“AGAINST” is a grab-you-by-the-guts quirky and spiky comedy/drama. Literally – you will be on the edge of your seat. It’s that taut and stressful. Writer Theresa Rebeck has written a story about office atmosphere – and how, even in this day and age (like “Madmen” in the 50’s) men still don’t give women credit for the work they do. If a woman gets a great idea for a project – the men will invariably put their name on it.

This story is about such a woman. She has talent. She can resolve a problem on a clients project – but the men scoff at her. Especially the big boss, who drinks so much that he can ‘t remember what he said the last time he talked to anyone. It’s these kind of creeps that always seem to float up to the top from the bottom of the toilet. Lets be kind, and call him a “Terd”.

In the program it says: Featuring (names of actors). Featuring? They are stars: And these STARS are Rod Gnapp, who is as usual – truly, madly wonderful – Warren David Keith is remarkable, drunk or not – James Wagner (a Gavin Newsom look-a-like) is 3-D slick. Yep, he’s slick as oil. Sarah Nealis, is a great new find. She can be sweetly chummy, and stab you in the back while you’re not looking. Pamela Gay Walker is absolutely Phenomenal as a talented Architect that has to fight for recognition. She’ll make your hair stand on end.

‘Against’ is a Grand Display of fireworks in the office.

This is the little musical that could. It would be an under statement to say that it is an unqualified joy. This is my second time to see this high-spirited musical.

Seated in a Chair, an older Gentleman who loves musicals from the 1920’s sits in a chair close to his old fashioned record player. The man in the chair takes us into his fantasyland. We not only hear the music – but the stage begins to fill up with wonderful musical vignettes. Along the way – the older man keeps us laughing with his asides. Sometimes he even stops the action by removing the needle from the platter.

The man in the chair is dismissive of modern composers and artists. To him the real world is in the early 20’s 30’s and maybe some 40’s (but that’s pushing it). Anyone who has acted in a Broadway or off Broadway show will recognize instantly the brilliance of the show. The music and the songs are strong. But without the fantastic singers and actors on the stage it would be hollow. The well-trained and talented cast makes this “Drowsy” perfect. Oh, the nostalgia – the sets – the singing – and the old style of song writing. Just give me a big bowl of homemade Ice Cream and I’m good forever listening to that music.

Get ready – cause you’re gonna feel all ‘bouncy and bubbly’. I don’t care what your age is – this is fun for all. The man in the chair is so charming. You want to just get up on the stage and hug him and say “Put another record on the platter.” These are really humable tunes that harkens back to the times when shows made you feel good. You wanna feel good? Then go to see this show.

AND THERE YOU HAVE IT. ALMOST A CAST OF MILLIONS ELECTRYING THE AUDIENCE. “TOTATALLY INSPIRING!”

At the Lesher Theatre Center in Walnut Creek

MARRY ME A LITTLE AT EUREKA THEATRE

Well this little off-off Broadway revue could also be called “Marry Me Not So Much”. The show first appeared in 1980. It seems to me that these were “Trunk” tunes that were cut from other musicals. Sondheim just kinda stored them for future use. He gave actor Craig Lucas access to notes and music. They worked together side by side to create a little show about two single people who are yearning to find someone to Marry. It was written with a straight couple in mind.

Now, let’s move to San Francisco where the production is now playing with a two-man cast. The original was written with a boy and a girl. Theatre Rhino got permission from Sondheim to change the romance to be between two men. The show was also done before in Los Angeles with two men to mixed reviews.

This is about two guys, who think that they are falling in love. The younger one is more reluctant to get into a long relationship – but the older man is all for it. There are some interesting things about the show. The music and lyrics have charm. Here’s a sample: “Marry me a little, Love me just enough, Cry, but not too often, Play, but not too rough, Keep a tender distance – so we’ll both be free. That’s the way it ought to be. I’m ready! I’m ready now!” Sondheim does have a way with lyrics. However, I think that the music is just ‘talk singing.’ There is nothing in it that I would call a ‘showstopper’. There’s not a ringtone that you would want to download.

In one of the songs they sing – “Someone—Marry me a little.” That may sound like fun at first – but in this case the heavy breathing love doesn’t last. They breakup. They are bored. Even the not very coy gestures toward sexual delights don’t seem to light a fire under the sheets.

It ends with this poignant song. “It Wasn’t Meant to Happen”. And as hard as Theatre Rhino worked on this musical – it just isn’t going to happen. I’m not sure that picking scraps out of the Trunk is enough to make a musical. But then – Sondheim was young then, and he wanted to make it happen. Also — a couple more musical instruments on the stage might have fleshed it out more.

The singing is quite impressive by Caleb Draper and Bill Farner. They talk sing everything (as is called for.) I think that Sondheim should have put in a few scenes where the men actually talk to each other. But — maybe not. Maybe the script is so lame, that nothing could change the outcome. The musical almost makes it – but the production needs some tuning up. The pace lags. Maybe that has picked up. Lets hope so.

AT THE EUREKA THEATER

Anika Rose will be at The Fairmont. Courtesy Photo.

ANIKA NONI ROSE AT THE FAIRMONT VENETIAN ROOM THIS SUNDAY

Tony Award winner Anika Noni Rose will appear in an intimate evening of songs made famous by Blossom Dearie, Lena Horne and other legendary singers this Sunday. If you don’t know – the Venetian Room at the Fairmont Hotel is probably one of the most famous rooms in the United States. It had not been used much until recently when Bay Area Cabaret moved the Cabaret series to the classic room. The show starts at 7PM at the Venetian Room (Top of Nob Hill). There is also a glamorous Restaurant just before you get to the Cabaret room, if you would like to have dinner before the show.

Rose studied at San Francisco’s American Conservatory Theater. Then moved on to New York and was asked to be in many Broadway shows. She won her Tony award for the acclaimed “Caroline or Change.” You may also remember her for her performance in the hit movie “Dreamgirls”. Rose played Dreamgirl Lorrell Robinson. She also reprised her role in Caroline or Change in San Francisco. It’ll be Great to have her back.