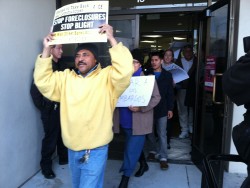 For the second time in as many weeks, District 11 Supervisor John Avalos joined community activists from the Alliance of Californians for Community Empowerment and residents of the Excelsior to protest the lending and foreclosure practices of four of the major banks which have branches in the neighborhood. The middle-class, ethnically-diverse Excelsior has been one of the harder-hit areas in San Francisco by the foreclosure crisis.

Two weeks ago, protesters swarmed Bank of America, Citibank, Wells Fargo, and Chase Bank locations in the Persia Triangle, demanding the opportunity to meet with bank executives to air their grievances face-to-face with those in charge of making the decisions that have hurt so many families. Last Thursday, according to Erin Franey, an organizer with ACCE, representatives of the movement were promised such an opportunity by public relations people for Wells Fargo, but so far, no communication with that bank or any other has come to pass.

This time around, there was an added bitterness in the air. Foreclosures have continued utterly unabated as the holiday season bears down on financially strapped families. Numerous families are preparing to be kicked out of their homes on or around Thanksgiving or Christmas, including one elderly child care provider who attended the rally to protest her own eviction, scheduled to be carried out the day before Thanksgiving. Although banks have thus far remained impassive regarding changes to foreclosure practices, activists and residents hoped that an appeal to the holiday spirit could at least bring about a temporary stay on foreclosures until January.

No longer embroiled in a tight election race, Avalos appeared even more personally engaged in the proceedings than he had two weeks ago. With virtually none of the heavy media presence drawn to the area the last time ACCE staged a demonstration, Avalos was the only elected official present. The supervisor marched with protesters to Bank of America, their first destination, and took part in a mass call-in to the answering machine of the Bank’s director of communications, before leaving and wishing the demonstrators well.

The banks, by and large, reacted much more swiftly and coldly to the demonstrators than they did two weeks ago. Bank of America completely shut down for the day within 15 minutes of the protesters’ arrival, a decision ascribed by one police officer explaining the situation to the gathering to the bank staffers’ being generally timid, fearful people “living in an ivory tower.” As in the previous week, several customers came by planning to divest their own funds from the bank, but were not allowed in.

At Chase Bank, protesters were again barred from entry. In a surprising departure from the previous action, however, one representative from the demonstration was allowed in to speak with the branch manager, only to be told that Chase’s corporate headquarters was refusing to respond. Protesters then moved to Wells Fargo, where a letter issuing demands was faxed, for the second time, to the bank’s corporate offices. The action concluded outside Citibank, where the building had been locked up before the protesters even arrived. One customer showed up midway through this portion of the demonstration trying to make a payment on his house. He was denied entry.

Franey, the de facto leader of the action, explained that demonstrators still believed they could force bank executives to sit down with them, even in the face of the indifference that has been shown over the past couple of weeks. Numerous neighborhood residents will be divesting funds from the major banks now and reinvesting in credit unions, a development Franey hopes will lead to the opening of a local credit union branch in the Excelsior.

“The reason people in this neighborhood bank at these large banks is because there aren’t any alternatives,” she explained, and pointed toward the establishment of a local credit union option as one of the movement’s major tangible goals, along with airing grievances face-to-face with bank executives and bringing about a change in the way major banks deal with foreclosures and loans. Further demonstrations to that end are in the works, with some scheduled for the near future.