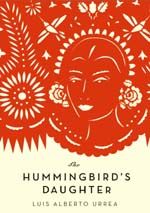 I found myself in San Jose’s Dr. Martin Luther King, Jr. Library, 2nd Floor, on a Friday night, fully anticipating the arrival of author Luis Alberto Urrea. The unofficial spokesman and writer for issues on the US/Mexican border, this blond haired Tijuana-born author is quickly becoming a legend in his time as the source of many prolific books.

The wide open room was holding about one hundred people who were talkative and friendly amongst one another. Urrea sat in the very back of the room casually laughing and remarking to acquaintances nearby; dressed in a black suit, dark blue shirt, glasses, and beard, reminiscent of a college faulty member.

Before his speaking engagement the crowd was blessed with a performance by Nicolas Valdez of Texas, who played his accordion and acted out spoken word pieces and poems in between. Then it was time to bring out the author himself.

After a brief biographical introduction by one of the presenters Luis Urrea came to the podium amidst a thunderous applause. The writer is celebrating the release of his new book, The Hummingbird’s Daughter: A Novel. This is a tale of Teresita, a survivor of childhood abuse and a brutal rape leading to a coma, from which she awoke with mystical powers. Documented history and oral tradition has said her powers included healing, seeing the future, a talent for hypnosis, and the ability to change her body size at will. Chased out of Mexico by the dictator Porfirio Diaz, who was afraid of her influence, Teresita finally ended up exiled in the United States.

Luis Urrea has a deep connection with character of Teresita because he is a distant relative of hers. Growing up between Tijuana and San Diego he often heard tales of this woman who could fly and cure people with herbs and magic. Disclosing this information as folktale Urrea’s life eventually brought him back to rediscovering this lost relic in his family history and the book, The Hummingbird’s Daughter, is actually the culmination of 20 years of research. In fact the author stated that, “this book is actually a lifetime project and all my writings are distractions to this story.”

Urrea spoke very candidly with the audience, telling outrageous stories about his research and making everyone laugh with his humor, imitations, and experience in studying not only the ways of indigenous people but learning the story of his own family. He remarked about the difficulty in having to suspend his Western Civilization mentality of logic and theory, in order to engage with such ideas as spirits and healing. As the only member of his family to go to college, and a former Harvard faculty member, Urrea said he had to confide in his aunt that he couldn’t write the book, that his upbringing wouldn’t allow it. He said his aunt simply stated: “The western mind is a fever, it will pass.”

So with this new book Luis Urrea is attempting to tell a story long forgotten and looked down upon by historians as a tale of a heretic woman who was only a folk saint to displaced Indians; such undermining of Teresita’s role in Mexico is usually due to the repressiveness of privileged men who don’t want indigenous stories plaguing their history books.

Many of the rituals and healing practices within the book were taken from Urrea’s personal experience in the desert learning various methods. He lets it be known that what sacredness is revealed is what he was allowed to dispel and nothing more. The book is not intended to be a New Age guide to spirituality.

The Hummingbird’s Daughter is full of cowboys, indigenous ideas, magic, pre-Revolutionary politics, class systems, and the destiny of one girl coming to terms with her life amidst this chaos.

Luis Urrea also was able to speak about his book, The Devil’s Highway, which was recently released in paper-back form. This true story follows the epic journey of Mexican migrants who paid a coyote to smuggle them across the border into the United States. However the trip went astray ending with disastrous results. Urrea described his engagement with the Border Patrol as he did research for this story. He said he was forced to suspend his liberalism in order to put a human face on the Border Patrol’s role; eventually embracing them as human beings that shouldn’t be generalized or stereotyped. One of the patrol men, who Urrea befriended, actually told him, “If my wife and kids were hungry I would walk into another country and look for work and food also.”

The Devil’s Highway is currently being filmed right now as a movie for a future date. Urrea explained how Mexico City wants nothing to do with book or the movie. They feel that the idea of the Border Patrol rescuing Mexicans would be too slanderous to the pride of the country. But as Urrea explained, “People in deep Mexico know as much about the border as people in Wisconsin. Nothing.”

Luis Urrea is definitely a premier writer of our times. With a combination of wit, humor, and vivid scenarios, he is able to capture the feelings of the characters. Whether they are about the people living amongst the horrible conditions of the US/Mexican border, like in his books By the Lake of Sleeping Children or Across the Wire, or the journey’s of life, as shown in The Hummingbird’s Daughter, Urrea has the ability to narrate a story and build upon a mood that keeps the reader interested and wanting more.

By the time Luis Urrea closed the night I realized two hours had flown by. He answered questions and tried his best to answer them in an honest manner. He said that he has received a lot of support for his writings, especially from the Yaqui Indians, who greatly influenced The Hummingbird’s Daughter. When questioned about his fame he became very humble and stated that the best part of public notoriety is serving the people.

Urrea has recognized what he called a “propaganda war against us.” Young people are dying and the famous people who can help don’t do much except give money. Somebody has to receive and give back their time, effort, and knowledge. In his words, “There is no them, only us.”

Luis Urrea is the winner of a Lannan Literary Award, an American Book Award, a Western States Book Award, and the Christopher Award.