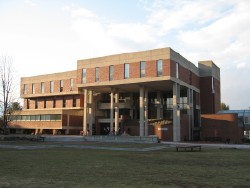 Although the reviewer described the book’s author as a member of a “despised fringe group” at Hampshire — which should have raised flags about his credibility — the review highlighted the book’s depiction of Hampshire as “a laboratory of self-mythologizing.” The reviewer also condescendingly refers to Hampshire students as among the “East Coast hippie majority” — despite the book’s setting in the late 80’s and early 90’s. The only reason to review such an obscure memoir is to denigrate a liberal institution, which has become all too typical in the New York Times Book Review section.

Anyone paying close attention to the Sunday New York Times would notice a trend away from reviews of contemporary political books, particularly those that offer progressive perspectives on current politics and/or social movements. The Times has developed a particular attraction to celebrity bios, while offering lengthy front-page reviews of books about such conservative icons as Ayn Rand and William F. Buckley.

I have been reluctant to write about the rightward shift of the Sunday Times Book Review because I did not want to be accused of sour grapes over it not reviewing my own most recent book. But it is worth noting that three books came out in the past year about Cesar Chavez and the UFW, and none were reviewed in the Sunday Times despite one being authored by prominent activist and scholar Marshall Ganz, and the other by Miriam Pawel, a longtime reporter for the Los Angeles Times.

Books about the UFW promote progressive activism and idealism, and inspire readers to work for greater social and economic justice. Instead, on January 3 the Times to promoted a memoir of college years that mocks such goals, and allows its reviewer to recycle old clichés about alternative institutions and progressive politics.

The Truth About Hampshire College

Why would the Times use its scarce Book Review space to promote a memoir about an author’s random small college experience in the late 80’s and early 90’s? Because Times’ editors clearly see Hampshire College as one of those 60’s era institutions that refuses to change with the times, and must be prodded to do so by the Times’ promoting books that mock such throwbacks.

Unlike the University of California Santa Cruz, whose idea of “changing with the times” is to eliminate its popular Community Studies department, Hampshire has by and large not changed its curriculum to increase required courses or to redirect students from the liberal arts to business or engineering. And while the Times praises the memoirist for “expertly” exaggerating a particular student’s fear of graduation — this student is said to be in his second decade at Hampshire — the track record of Hampshire alumni is quite the opposite.

In addition to the prominent creative graduates cited above, Hampshire graduates also include Jeffrey Hollander, the Founder and CEO of Seventh Generation environmental products, and Peter Cole, a poet and Macarthur fellow.

Locally, Steve Sutcher, a key figure in the Cheeseboard Collective who has sparked the creation of similar bakery/cheese collectives throughout the Bay Area, is a Hampshire grad. As is Jacqui Barber, who is Associate Director of the Lawrence Hall of Science and the founding Director of the Great Explorations in Math and Science (GEMS) Program through which she has authored or co-authored numerous inquiry-based mathematics and science curriculum units and pedagogical handbooks.

Innovative entrepreneurs like Lansky, Hirshberg, Hollander and Sutcher sure don’t fit the picture of the “East Coast hippies” that the book praised in the Times claims represent a majority of Hampshire students. And one must ask how Barber was even admitted to the school as described in the review, given her focus on science and math.

I will give the author of the Hampshire-bashing book credit for the self-knowledge of his title, “Don’t Follow Me, I’m Lost.” He is lost, as increasingly is the New York Times Book Review in the works it reviews and the liberal-bashing reviewers it utilizes.