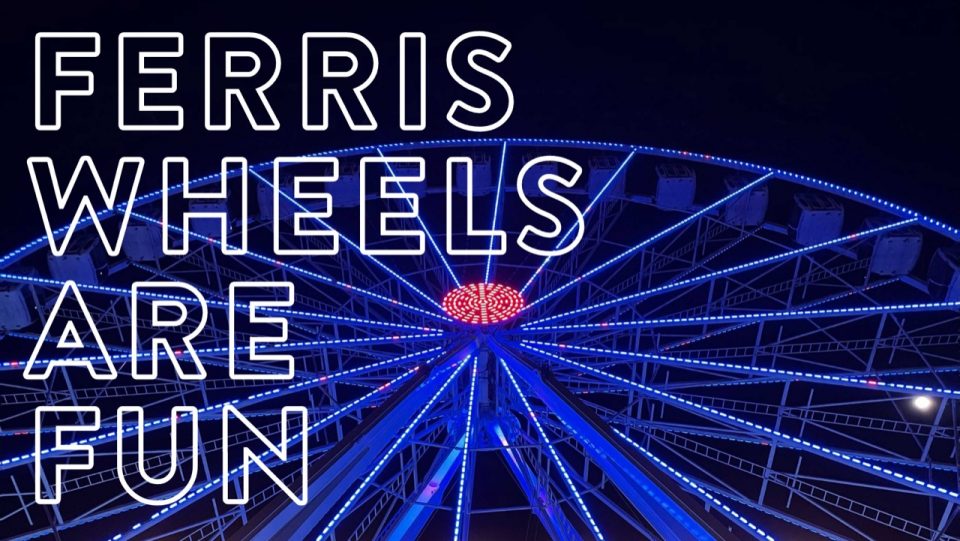 To celebrate the 150th anniversary of Golden Gate Park, the 150 foot high Skystar Observation Wheel  was installed near the California Academy of Science and de Young Museum. While the pandemic closed the Ferris Wheel for most of its tenure, when operating it offered desperately needed fun during a difficult year. It was an easy decision for the city’s Recreation and Park Department to seek to extend the Skystar’s tenure until 2025.

In most cities, it would be an easy decision. If activists get involved it is in battles to preserve such attractions, not remove them. But this is San Francisco, where anything new or fun has its opponents.

The Haight-Ashbury Neighborhood Council and local Sierra Club chapter oppose the four year extension. Based on input he has gotten from constituents D5 Supervisor Dean Preston also opposes four more years. He told the SF Chronicle, “this is a park, not an amusement park.”

A Ferris Wheel in Golden Gate Park is hardly the second coming of San Francisco’s legendary Playland at the Beach (though many wish it had never left the park’s border). London and Paris have prominent Ferris Wheels, one near the Louvre and the other on the Thames; nobody identifies these areas as akin to amusement parks.

Resuming the War on Fun

The Ferris Wheel fight signals a resumption of what was long described as San Francisco’s War on Fun. In 2012 the San Francisco Bay Guardian declared victory (“The War is Over. Fun Won”), but this announcement now appears premature.

The Skystar Wheel was planned as part of a major citywide celebration of Golden Gate Park’s 150th anniversary. The pandemic curtailed this. The Ferris Wheel arrived just as the first shelter-in-place orders were announced in March 2020.  It finally opened at 25% capacity on October 8, but new health orders shut the Skystar Wheel down a month later.

It has not reopened.

The Skystar’s placement is consistent with the surrounding area. The Wheel sits on a parking garage and adjacent to two very industrial and well lit museums.

I used to love taking my young kids for rides on the historic Golden Gate Park Carousel (we call it a Merry Go Round). Thank goodness an earlier generation of San Franciscans did not stop its permanent installation when the park opened in 1888.  After all, a carousel is more consistent with an “amusement park” than with “nature.”

Next to the Carousel is the remarkable Koret children’s playground. It’s probably the city’s best. But those long slides and bridges don’t seem very “natural” to me.

The point is obvious: Golden Gate Park has from the very start included amusements and recreational activities that residents accepted as consistent with the natural environment. Opponents of the four year extension are battling against the park’s actual history in order to stop people from having fun.

The battle over the Ferris Wheel has a precedent. In 2013, opponents of the Skystar tried to stop the installation of artificial turf soccer fields and evening lighting near the Beach Chalet at the park’s west end. Artificial turf prevents fields from becoming mud baths, unplayable for months. New lighting  allows evening use, a necessity given the high demand for soccer fields.

The Sierra Club and opponents like Kathy Howard of the Golden Gate Park Preservation Alliance (she is also quoted as an opponent in the SF Chronicle story on the Ferris Wheel) argued that the artificial turf and the evening lighting were not “natural.” When they lost at the local political level they filed a  lawsuit to stop the soccer fields. It failed. This led them to put a measure on the November 2014 ballot to stop the artificial turf and lighting . The ballot also included a separate initiative backed by soccer field advocates authorizing the proposed uses.

What did San Francisco voters decide? The Sierra Club measure was defeated by 54% while the initiative allowing the plan passed with 55%.

Fun and youth recreation won. And they should win again this week.

San Francisco’s Historic Preservation Commission votes on the requested four year extension on Wednesday, February 17. The meeting begins at 12:30 pm and people can call in their comments as with other virtual public meetings.

The neighborhood group Grow the Richmond has gathered over 800 signatures in less than a week on a petition supporting the Wheel. But Wheel supporters are encouraged to contact the Commission to express support.

As San Francisco reels from closed businesses and the lack of personal interactions, let’s hope the Historic Preservation Commission supports the Wheel’s extension. This is a time when the city really needs to support the side of fun.