Atheists Get a Place at the Table 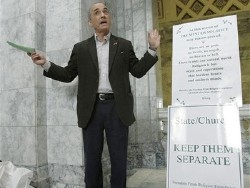 Imagine this sign displayed in San Francisco next to one of those public xmas trees, such as the one across from City Hall or in the downtown shopping area: “At this season of the Winter Solstice may reason prevail. There are no gods, no devils, no angels, no heaven or hell. There is only our natural world. Religion is but myth and superstition that hardens hearts and enslaves minds.”

That’s what the Madison-based Freedom from Religion Foundation put up this holiday season in the marble hallways of the State Capitol in Olympia, Washington between the Senate and House chambers. The placard stands next to a giant xmas tree (a pagan symbol that has become associated with the Christian holiday) and a traditional nativity scene depicting the birth of the Jewish child Christians believe is their savior. The flip side of the display simply reads: “State/Church: Keep them separate.”

All three displays are privately funded. A state spokesperson said that they represent freedom of speech and had to pass certain criteria to qualify, adding that government does not endorse any of the points of view expressed by the participants. Which is, of course, how it should be in a country that purports to have separation of church and state. Two years ago, a Menorah was placed in the same building, but Jewish groups haven’t come forward to do it this year.

The choice of Washington’s State Capitol for an Atheist placard makes sense when you consider that the Northwest area of the country reportedly has the highest number of nonbelievers. The Freedom from Religion Foundation says it’s about 25%.

“Our members want equal time, not to muscle, not to coerce, but just to have a place at the table,” the Foundation’s Co-President Dan Barker told the Associated Press.

Added Barker: “Us being here underscores this is not a Christian state. It’s a secular state, where Christians are welcome.” Amen to that, brother.

Having displays such as the Foundation’s does indeed remind us that this is not a Christian country. While Christians have a right to celebrate their holiday, they don’t have a right to exclusivity in messaging at this time of year. Just because there are many more Christians than Jews, Pagans or Atheists doesn’t mean they should be able to censor the rest of us who don’t believe in their religion.

Having only Christian displays, such as trees or nativity scenes, in government buildings or on government land does give the wrong impression. They imply that we are all in agreement about the significance of this time of year.

Olympia’s seems a much saner and democratic idea: Let everyone have their say.