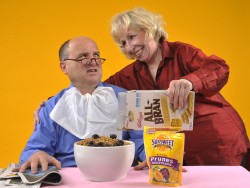 We’ve all seen the Commercial on T.V. where an aging woman falls on the floor and says: “Help, I’ve fallen – and I can’t get up.” It kind of became a joke. Well, in “Assisted Living – the Musical” – the producer of the show has taken that phrase to new heights at the Imperial Palace.

There is one skit where a 90-year-old driver takes his Cadillac out on the road even though he has bad eyesight. But, what the heck he lets us know that he loves his time on the road as he sings to the jingle “A Ton and a Half of Cadillac Steel.” Don’t get in his way …

The words are remodeled from popular songs of yesteryear. Here’s one that’s a hoot: – “Lost My Dentures on Steak Night Blues” – those that wear them, really will get a laugh. Just hope they don’t fall out. The show is just delightful. It’s not Les Miz or Billy Elliott – but for a small musical (just three people) in the show – it brings back memories with songs like WalkerDude@Facebook.com where an elderly woman sings a song about “A man with Endurance and Private insurance.” I think you can figure that one out.

The three people change characters – so it’s almost like seeing a cast of maybe ten. They change clothes often. The scenes go from a Real Estate Lady to a sleazy Lawyer who wears a cowboy hat. In country Style Bob Greene lets us know in song that he’s got “A Tattoo on his Butt” Then, there’s the AARP song. It’s a hoot – as they tunefully delight the audience with all the joys of belonging to that organization.

The Actors are all superb. Zoe Conner has been on “Days of Our Lives” and Nickelodeon. She has been in “No No Nanette”, “The Music Man” and many other venues.

Robbie Cowan is delightful (Actor – Piano player) has been in the off-off Broadway revival of the musical “Touch”. He has been on NPR and a sold-out Cabaret performance at “Don’t Tell Mama.” He has also been in “Forever Plaid” and 42nd Street Moon shows in SF.

Bob Greene has been in “Boys from Syracuse” (he got Best Actor Award from the Bay Area Critics Circle) for that show. He also has many film credits – including “Pursuit of Happiness with Will Smith, Flubber with Robin Williams, Copycat with Holly Hunter and Woman on Top with Penelope Cruz. Plus – you have seen Cowan in many T.V. Commercials.

If you hear them sing the song “Drive Thru Window” – you’d better move out of the way. – When one Actor falls – the other says: “Wait! – We’ll all go down together.” It does not mean what you think. And the best line I like in the show is from Bob Greene: he looks at you with a twinkle in his eye and says: “You can trust me, because I’m a Lawyer.” That look tells you that you can’t trust him. And if you’re aging – they throw AARP enrollment blanks at the audience – just to help you out. They may be aging – but like Secretariat, the horse – they win by a length.

This is a feel good show with lots of laughs in it. The actors are sure to win your heart. They play duel roles and the many characters are a real treat. There’s plenty of room at the spacious tables in the Theater – bring your mom and dad (walkers and all).

Bonus: Dim Sum is included before the show. Yum, Yum!
AT THE IMPERIAL PALACE IN CHINATOWN

RAPT – “Keeps You Guessing to the End.”

Talk about intense…this movie will keep you on the edge of your seat. It’s all about the Rich and Powerful – and how others want the money. So, they plot to capture the head of a huge corporation. Industrialist Stanislas Graff (Ivan Attal) was on his way on a business trip to China. A motorcycle slides in front of his car. Graff gets out of the car to help the man. It was all a trick. They grab him throw in the back of a car, then blindfold him and humiliate him with excessive brutality. The purpose? They want money. They know he has lots of it – and they know that he is a cheating playboy that gambles a lot.

What is great about this movie is the detail. Almost every scene has you winching. To get more money out of Graff, they cut off one of his fingers, and mail it to his wife, to let the company and his wife know that they have him – and if they want him back, they must follow the directions to bring them a huge sum of money. Or … they will deliver pieces of him until they get the money.

This French Film is based on a true story. Graff was too confident. And he did not have a guard – that was his first mistake. There are many things going on here. Maybe Graff was in on it from the beginning? The Police suspect that he might be. Maybe one of his bitchy daughters was in on the plot. Or, even Graff’s own mother could easily be in on it. She has a tough personality. With just one word – she can send shivers up and down your spine.

Watching this movie is a wild and unpredictable story. Things change rapidly as this thought-provoking thriller mixes wealth with down and dirty people. You’ll think twice before you walk around by yourself.