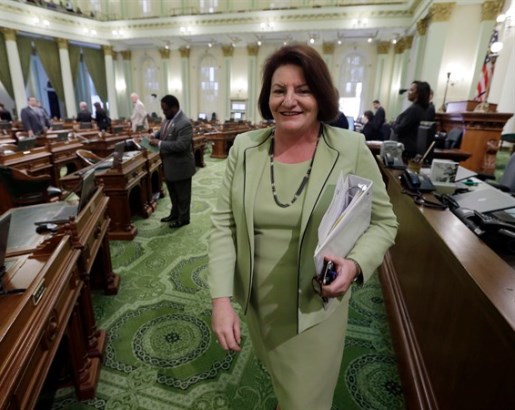 On June 18, the Assembly Housing and Community Development Committee voted 3-4 to reject SB 1439,  leaving the Ellis reform bill one vote short of passage. A motion for reconsideration was passed making a new vote possible, but it is unclear what can get either of the no voting Democrats, Cheryl Brown and Sharon Quirk-Silva, to vote in favor.

Assembly Speaker Toni Atkins did next to nothing to help SB 1439 pass. And as I have written time and again, when the leadership in Sacramento is not fighting for a tough bill, it’s hard to prevail.

Backers of SB 1439 mounted an all-out campaign in the past two weeks to get Brown and Quirk-Silva’s votes. In fact, not since the annual battles to defeat the Costa-Hawkins bill in the 1980’s and early 1990’s (it finally passed in 1995) has a bill impacting tenants seen such broad support.

Organized labor worked tirelessly to get Quirk-Silva’s vote, as she is usually with them. The effort involved top officials from the UFCW and IBEW, along with the UFW and other unions.. The California Federation of Labor contacted Quirk-Silva on tenants behalf.

Tenants Together coordinated multiple bus trips up to Sacramento, filling hearing rooms with powerful speakers for the bill.

Catholic Bishops and religious figures from her district urged her to vote yes, and kept calling her even after she seemed committed to a no vote. Brown’s real estate backing made her vote less likely, but Mayor Lee’s office organized a multi-pronged lobbying effort that included a letter to Brown from fellow African-Americans London Breed and Malia Cohen on the small chance she could be swayed (at the hearing Brown blamed SF’s housing problems on rent control. She also said she asked her landlord brother about the bill and he told her it was a taking).

Mayor Lee called legislators and used the powers of his office to an extent never before seen in San Francisco for a state tenant campaign The Mayor had a virtual SB 1439 war room at City Hall, and had staff working  fulltime trying to secure the necessary votes.

Yet despite the mayor’s efforts and support from tech, tenants, Latino groups and the broadest of coalitions, Big Real Estate kept the two key Democratic votes in its camp.  They also kept the Speaker at bay. And they won this Democratic support on behalf of speculators who evict elderly tenants for profit—hardly a testament to the values of the Democratic-controlled California legislature ( Republicans opposed Ellis reform but don’t claim to care about the elderly or vulnerable).

Think about what this vote says about the Democratic majority in the California Legislature. It could not even pass a bill that targets  people who buy rental housing with the sole goal of evicting longterm tenants and immediately going out of the rental business.

Democratic legislators love raising money from San Francisco, and they benefit from the city’s huge Democratic pluralities in state races. Yet when the city collectively turned to the Democratic Legislature for help, all it got was a slap in the face.

How did the Democratic Legislature get to be such a mess?

Why is SB 1439 on the verge of defeat instead of moving to the Assembly floor?

The Speaker’s inaction is a major reason, but the other is term limits.

Term limits has left the California Legislature and particularly the Assembly filled with politicians who know little or nothing about the Ellis Act or other tenant-related laws. Real estate lobbyists fill this information gap. They get politicians to parrot the most foolish of arguments, knowing that logic or facts do not matter when large campaign checks can be delivered.

The 2012 change in term limits will help this knowledge gap, because Assemblymembers can stay in office for 12 rather than 6 years. But most current legislatures are governed by the old rules, which explains why so many had nothing intelligent to say about the Ellis bill.

First, it weakens the power of leadership. I wrongly wrote last week that Speaker Atkins could stay in power for 12 years when she is in fact limited to six; this reduced her leverage over her colleagues (Atkins was so disconnected from the politics of this bill that her aide even argued her inaction made no difference because the Governor would have vetoed the bill anyway. But all facts pointed to Governor Brown signing the measure).

Second, term limits requires professional politicians to keep raising money for other offices. Real estate contributions impact most districts across the state, and legislators are more fearful than ever of alienating landlord interests.

What is remarkable about the current Ellis legislative fight is how few Democrats in the legislature even express any support for tenant interests. They will support “working people,” or, like Quirk-Silva, vote for veterans, the elderly, or the mentally ill but they do not acknowledge their complicity in making life worse for these constituencies in San Francisco.

For these legislators, a “tenant” is a species devoid of ethnic, gender, age or mental health status; they are alien beings who have no feelings, families or lives worth caring about. That’s why these legislators refused to even acknowledge the pain they are inflicting on San Francisco tenants. That would require actually listening to testimony instead of following the script laid out for them by Big Real Estate.

While there are procedural scenarios that could get a new vote, SB 1439 is all but legally dead. The floodgates of Ellis evictions will remain open, and many Democrats can continue collecting real estate dollars to block reform while putting out campaign literature describing themselves as a “champion” of working people.

It is the most cynical of strategies, and one that for far too long has characterized the Democratic-controlled legislature.

San Francisco can build on its 2014 experience on a renewed effort next year to pass Ellis reform, and maybe new faces in the Assembly will make a difference. But that’s a long way off, and leaves San Francisco unable to utilize a critical tool for stopping evictions and preserving rent-controlled housing.