“Aspada: Finding the Global Groove” Comes to the Presidio 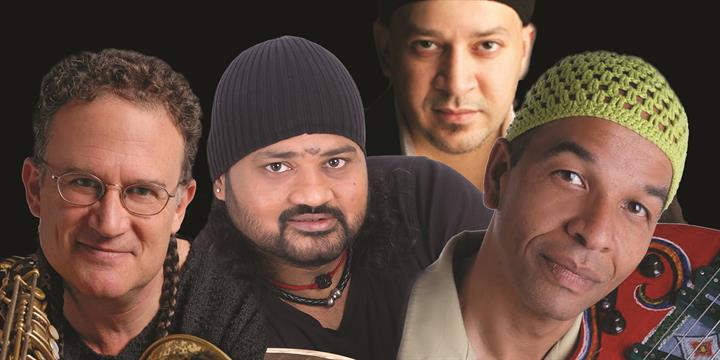 “Drawing on the musical traditions of their homelands in India, Africa, Europe and America, four world-renowned musicians discuss and weave a global tapestry for the new millennium, tonight at the Presidio Officers Club. ASPADA, comprised of George Brooks (saxophone), Kai Eckhardt (bass), Osam Ezzeldin (keyboards), and Selvaganesh Vinayakram (percussion), will perform original music and describe the rhythmic, melodic, and harmonic components that form each composition. They will pay particular attention to the rhythmic language of south India and the role that it plays in the structure of their compositions and improvisation. This is an extraordinary opportunity to observe musicians from diverse musical backgrounds conversing in a new musical language.

Saxophonist and composer George Brooks is acclaimed for successfully bridging the worlds of jazz and Indian classical music. He founded the seminal Indian fusion groups Summit with Zakir Hussain, Bombay Jazz with Ronu Majumdar and Larry Coryell, the Raga Bop Trio with Steve Smith and Prasanna, and Elements with Gwyneth Wentink and Kala Ramnath. Brooks has collaborated extensively with American composer Terry Riley and has performed and recorded with genre-defining artists Etta James, Anthony Braxton, Jaki Byard, Talvin Singh, poet Michael McClure, and Ray Manzarek (of the Doors). He has performed throughout the US, Canada, Europe, Asia and the UK and was a featured soloist on John McLaughlin’s Grammy-nominated “Floating Point” CD. In 1996 he recorded “Lasting Impression” and “Night Spinner,” for Zakir Hussain’s Moment Records. The success of these CDs led to performances and recordings with India’s leading artists; Hariprasad Chaurasia, Sultan Khan, VM Bhatt, U Srinivas, Vikku Vinayakram, Trilok Gurtu, Shujaat Khan, Shankar Mahadevan and many others. Brooks is a recipient of the American Composer’s Forum “Global Harmony” Prize and has received grants and commissions from SFMOMA, New Music USA, USArtists International, MetLife Creative Connections, and San Francisco Friends of Chamber Music.

Raised in Germany and Liberia, Kai Eckhardt came to the USA in 1980 to study at the Berklee College of Music. Upon graduating, Kai garnered world-wide recognition performing with the John McLaughlin Trio. The trio, consisting of Kai, John and Indian percussion phenomenon Trilok Gurtu, recorded “Live at the Royal Festival Hall” which still stands as a high watermark in global fusion. While touring the world with McLaughlin’s trio and later with Trilok Gurtu’s outstanding ensembles, Kai developed a remarkable facility with African and Indian rhythmic cycles. He combined these global rhythms with his love of funk and developed a unique slapping style simultaneously reminiscent of African kora and James Brown. After many years of touring, Kai settled in California and distinguished himself as a band-leader and composer founding the successful “jam band” Garaj Mahal and his current group, Zeitgeist. He is an in-demand performer and session musician and maintains an active teaching schedule, Kai and George Brooks are longtime partners and have performed together in the US, Europe and Asia with Summit, Zakir Hussain, Ray Manzarek and Bob Weir (of the Grateful Dead).

Selvaganesh Vinayakram was born in Chennai to Grammy-winner T.H. “Vikku” Vinayakram, a legendary musician and founding member of Shakti. He is known to audiences around the world as the astonishing kanjeera player in John McLaughlin’s Remember Shakti. The kanjeera appears to be a simple instrument, yet in his hands it produces a surprisingly large palette, similar to a full drum-kit. For his work with Aspada, Selva has created a hybrid drum kit incorporating traditional Indian percussion with cymbals and kick drum. Selvaganesh garnered international attention in the early 1990s performing with Zakir Hussain’s “Masters of Percussion”. In the late 90s he joined John McLaughlin’s Remember Shakti as a permanent member, securing his place in the pantheon of genre-defining percussionists. Selva is recognized as a world music innovator and a stalwart of traditional Indian music. Selvaganesh also maintains an active role composing for the Indian film industry.

Osam Ezzeldin was born in Cairo, Egypt and grew up immersed in the music of North Africa. At the age of 18 he heard his first recording of jazz, and his life immediately transformed. Osam embarked on a journey of self-directed jazz study, and he soon becoming indispensible to leading jazz musicians of North Africa. Osam’s love of jazz brought him to the United States, and his prodigious abilities at the keyboard soon immersed him in the professional world of jazz, blues and R+B. Osam continued to hone his skill as a composer and performer and was offered a full scholarship to the Berklee College of Music, receiving the highest honors. In 2006 Osam was awarded US citizenship as an artist of extraordinary ability, and after moving to San Francisco, soon joined Kai Eckhardt’s Zeitgeist and George Brooks’ Summit and has performed at all the major festivals and jazz clubs in northern California. Osam’s unique ability to blend contemporary jazz vocabulary with Arabic, Indian and Caribbean influences has led to performances with many luminaries of world music including Indian maestros Zakir Hussain, Niladri Kumar and Kala Ramnath and Turkish multi-instrumentalist Orhan Osman and the Turkophony Allstars, Uzbek percussionist Abbos Kasimov, as well as jazz stars Giovanni Hidalgo, Billy Cobham, Chuck Rainey, Kai Eckhardt and Dave Weckl.

This event is free but due to space constraints registration is required. Please complete the registration process below. Please note that registering does not guarantee admission. Registered guests will be offered priority admission that will be honored until 15 minutes before the start of the event.”