As You Like It, Sharon McNight and The Blue Dress 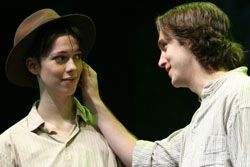 A 400 year-old comedy comes out fresh and new at the Curran Theater. Shakespeare’s “As You Like It” of course is a treasure trove of sparing word play.

Peter Hall, the Director has guided this wondrous, fascinating story to appeal to all. As he has directed – the actors do not over act. They don’t shout at you. I did have my doubts that I would understand an all English cast – so in the lobby of the theater I picked up a hearing headphone set – asking the attendant for ones that translate into American. At first, he had the look on his face thinking “What is this guy talking about?” And then like a Shakespeare barb had hit him – he got it, and laughed.

I laughed too, during this delightful version that takes place on a sparse, but vivid stage. Never have I seen so much mood set with so little. In the winter scene – you actually feel that it is winter – and you begin to pull you jacket around you to keep the chill away. This play does that to you. Or, I should say this Peter Hall production does it.

There is always “much ado” about the character Rosalind in this comedy – but I find the Rosalind part to be too long in the second act. The constant chattering makes her seem more a shrew than a sweet girl who is in love. However, I am sure that in Shakespeare’s time they found that there were not enough words for Rosalind to say.

Rebecca Hall does an amazing job with so much to say. I salute here fortitude and memory.
Dan Stevens (Orlando) is Rosalind’s love interest. Stevens gives a fascinating convincing performance as the young stalwart lad who will face any peril for love and honor.

On the phone with Stevens during an interview – I couldn’t understand a word he was saying – but on the stage he really showed me what a great actor he is. Every word was clear, convincing and heartfelt. Brilliant acting.

RATING FOUR GLASSES OF CHAMPAGNE!!!! The recipient of the Lee Hartgrave FAME AWARD for Best Ensemble Cast in a Comedy. At the Curran Theater.

Queen of the B’s would be Betty, Betty, Bette. Three leading ladies of the silver screen, Betty Grable, Betty Hutton and Bette Davis. The show opened with the music from Now Voyager – a huge Bette Davis hit, but Mc Night comes out looking like Betty Grable who was the favorite pin-up for the boys in World War II. Grable was a huge film star who also had some rough times, especially with her marriages. It was rumored that one her hubbies (Harry James) was abusive. She was so big – that the studio insured her gorgeous gams for Millions with Lloyd’s of London.

This is a Theater piece, which is nice to see in the Plush Room. In recent times – McNight has put together a show, rather than just get up and sing. And why not? She is a performer first – and in my opinion, her theme shows work. It worked this evening.

The audience was captivated, as one person said to me – “It was so great to hear these novelty songs. Hey, when I was a kid – I thought they were love songs. I never thought of them as being a novelty. For instance from “The Dolly Sisters Film” – McNight sang the touching beautiful “I’m Always Chasing Rainbows”, written by Harry Carroll and Joseph McCarthy).

In her Bette Davis segment she paid homage to Charles Pierce, who was the best Bette Davis impersonator ever. The song that Davis sang in a movie was “They’re Either Too Young or Too Old” – written by Frank Loesser and Arthur Schwartz. She had lots of fun with it and the audience had fun in correcting her account of the movie “Hush, Hush, Sweet Charlotte.” McNight gave us this tidbit – “The movie was supposed to be called “Whatever Happened to Cousin Charlotte.” That title was changed when one of the stars complained.
I’ll have to ask Sheet Music Czar Bob Grimes who the star was. He’s older than me – and more wise.

For me the best part of the show was when McNight sings Betty Hutton. She belted out “Rumble, Ruble, Rumble” from The Perils of Pauline and the tender “It Had To Be You.” McNight told us that Hutton is still alive and living in Palm Springs with the former owner of “The Woods” in Palm Springs. “He’s taking care of her” – McNight said.

Betty Hutton stayed with a friend of mine several years ago. She stayed about a month until he couldn’t take her addictions any longer. This was right after she had been a Restaurant hostess at a Gay Restaurant in Russian River. When she left his house -Richard claimed that the bed in the room that Hutton stayed in was jumping up and down at night. He had the bed removed and boarded up the room. And it stayed that way for five years until he finally sold the place and left the Bay Area.

Hutton was a tragic figure – and reached the very top of the heap. And like so many others – they get lured into using “helpers”. McNight picks up on this before one of the songs when she starts to sing it with very little pep. Suddenly her pianist Joan Edger says: “Sing it Like Hutton Did” and she throws her a little pill box. McNight pretends to take a pill – and then becomes hyper active – just like Hutton. They didn’t call her the “Blonde Bombshell” for nothing.

Betty, Betty, Bette is a fun evening – not so much for the songs, but for the memories of these great stars and Sharon’s saucy approach to everything. She has perfect comedic timing. I’ve always thought that she should try stand-up. She would be great. At the Plush Room.

THE FEMININE BOY (The Blue Dress)

The Blue Dress is a play about Gender identification. Based on his own experiences Bruce Bierman wrote this play about Gender I.D. It’s billed as a solo comedy – but I would more likely put it in the category of comedy-drama, because there certainly was lots of drama in Bierman’s life. At age 13, he was sent to U.C.L.A to see a shrink in the Neuro-Psychiatric Ward because he was caught wearing his mother’s dress and he liked to listen to show tunes and sing along with them.

When he was older he found a book by accident called “The Sissyboy Syndrome”. Now, he knew why he was sent to see Dr. Greene. He was in the book. Of Course, his name had been changed. The entire project has been paid for by the government. He had to endure questions like “Do you like to have a penis?” Remember, he was only 13. This harassment included 62 other boys who were “Confused”, as the government put it.

Now that he is grown and found himself – this closet drag queen is way out of the closet and he enjoys being a sissy boy. By the way, he is a wonderful Lyp- Sinker, his musical selections really add to the evening. The show continues at the New Conservatory through April 17. Bierman is a good actor and great storyteller. RATING: THREE GLASSES OF CHAMPAGNE!!!