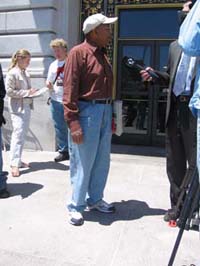 A press conference was held Monday to announce the launching of a petition drive to first suspend and then overturn the Board of Supervisors approval of the Bayview-Hunters Point Redevelopment Area. Referendum backers must obtain 30,000 signatures in only thirty days, whereas San Francisco initiatives typically allow six months for obtaining half this number. The referendum drive comes amidst a decline in the number of African-Americans throughout urban America, including New York City, Oakland, Chicago, and Los Angeles. Opponents of Bayview Redevelopment see the Plan as expediting the displacement of African-Americans from San Francisco, and see their move as part of a national campaign. Proponents believe voters will reject Redevelopment if the referendum qualifies for the November ballot, but face an uphill battle to qualify the measure.

SF Bayview newspaper editor Willie Ratcliff joined other community activists yesterday in announcing the kickoff of a campaign to get the 30,000 signatures needed for a referendum on Bayview-Hunters Point Redevelopment. The group hopes to get thousands of volunteer signatures while raising money to hire enough paid signature-gatherers to qualify the referendum for the ballot.

Practically speaking, the referendum will not come close to qualifying without getting at least 20,000 paid signatures. This means that at least $35,000 will have to immediately be raised for the referendum to make the ballot.

Obtaining even 10,000 volunteer signatures in thirty days is a huge task, particularly when many voters do not understand why Bayview Redevelopment is a citywide issue. San Francisco voters have become less automatic in signing initiatives, and many are either not aware of the Redevelopment issue or do not understand what side to take—-both factors will deter high-volume collecting.

Journalist Juan Gonzalez argues that these demographic trends are the result of a drive by real estate interests to reclaim cities for the upper classes that moved to the suburbs in the 1950’s-1970’s. He sees America’s big cities becoming like Paris, where the rich live in the city and the working-class in the suburbs.

Gonzalez recently joined New York Congressmember Charles Rangel at a community hearing on plans to evict tenants at the Pinnacle Apartments in Harlem so the building can be converted to upscale condominiums. The Pinnacle conversion joins the mass Ellis Act evictions in Los Angeles and the creation of a Bayview-Hunters Point Redevelopment Area in embodying what many African-American leaders fear is a national trend toward displacement of the black urban poor.

This national trend could build momentum for voter approval of the Bayview referendum if it makes the ballot. But it faces a steep uphill battle to do so, and the thirty-day time- clock is ticking.

To get petitions or otherwise help the referendum drive, contact Willie Ratcliff at editor@sfbayview.com