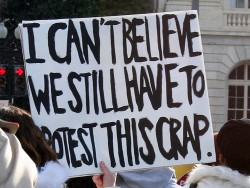 Today, the Proposition 8 trial in San Francisco Federal Court will hear its long-awaited closing arguments – as gay marriage advocates prepare to return to the ballot. And a new study conducted by the Haas Jr. Foundation looks at pre-election polling data from 33 states that passed anti-gay marriage initiatives. It concludes (a) we always do worse than what polls say, and (b) voters don’t change their minds about this issue during campaigns. The lesson, of course, is that we must work harder to move hearts and minds – and that work can’t be done in a short election season. Sadly, the implications of this study will strike many as discouraging – was all the money, time and energy we spent in California and Maine somehow a waste? It’s true gay marriage is a sensitive topic that voters develop hard feelings about that can’t be changed overnight. But the study did not focus on the small sliver of “persuadable” voters in each election who decide the outcome.

The Haas Jr. Foundation hired NYU political scientist Patrick J. Egan to study 167 polls in the 33 states that had a gay marriage ban from 1998-2009 – and compared it with the results on Election Day. And as we already knew – having painfully experienced this in state after state – the results after votes are counted are worse than what polls had said. Moreover, as Dr. Egan reported, poll results throughout the campaign were mostly static.

Did people lie? Yes and no. Egan’s analysis showed that polls accurately predicted the pro-equality vote – i.e., people who voted “no” on Prop 8 – but that they undercounted people who voted to ban gay marriage. So if a pre-election poll would show us winning a plurality of 48-45 (which campaigns find encouraging), it would mean that we lost 52-48.

Respondents didn’t tell pollsters they were going to vote “no” and voted “yes” – the so-called Bradley effect where voters want to give the “politically correct” answer. What instead happened is that embarrassed voters said they were undecided. Which is why, said Geoff Kors of Equality California, we should only go to the ballot after polls show a majority who plan to go our way. “Once people are for equality, we don’t see slippage.”

Voters are also not confused about which position – “yes” or “no” – is pro-gay marriage in ballot campaigns. In California, the “No on 8” side wasted enormous efforts trying to make sure that San Franciscans knew the right way to vote. In Maine, the “No on 1” campaign also spent a lot of time educating the base – but my anecdotal experience was that we saw more confusion there.

Egan’s analysis debunks the “confusion” theory because (a) we would have found it less of a factor in more educated and politically motivated states; and (b) if it was a problem at the start of a campaign, polls closer to the election would have gotten more accurate.

So why the discrepancy? Egan speculated that pollsters screened out “yes” voters more than “no” voters – leading to skewed samples. I believe that’s valid, because those who oppose gay marriage are less comfortable talking about the issue in general to people.

A second theory, which Egan said was “unlikely,” is that there was a substantial shift in opinion during the final days. Again, this goes back to the general theme of the study that political campaigns don’t change voters’ opinions on this issue. But having gone to Maine twice in October 2009, I believe there was a major change during the final week. We lost the election by six points, but my understanding is we won the early absentees.

At yesterday’s press conference, Egan was asked about Figure 1 from his study – featured here – that showed a visible bump in the final week before an election. “It’s very small and statistically insignificant,” he said – saying it only accounted for about 1%.

But what the data doesn’t show is who that one-percent shift was. Without question, same-sex marriage is an issue where the vast majority of voters on each side already made up their minds – and no amount of campaigning would change their opinions. Elections come down to just the sliver of undecided voters – maybe five percent – who don’t know or think much about the issue. A 1% shift could be 20% of those people.

After Maine passed Question 1, the Washington DC think tank Third Way did a post-election poll that zeroed in on “movable middle” voters. They produced a great study that argued we lost because of voters who support civil unions, but had not made the connection on marriage. Their report offers an excellent guide to “reframing” the issue for this targeted group.

Frank Schubert famously told a gathering they were going to lose Prop 8 – until he and Jeff Flynt decided to bank the whole campaign on fears that your children would have to learn about gay marriage in public schools. In the final week, “Yes on 1” in Maine shot an ad that endorsed civil unions. Their right-wing base was nonplussed, but it may have swung the election.

Could a campaign in Maine or California have won marriage equality – if we had done a better job persuading swing voters in the short span of an election season? The best part of yesterday’s press conference was when Geoff Kors of Equality California explained what happened when gay marriage activists had more time to change hearts and minds.

For the first several months of 2008 – long before the Prop 8 campaign began in earnest – EQCA ran a project in Santa Barbara County called Let California Ring. The goal was to start conversations about marriage outside the pressure of an election – via house parties, canvassing and a TV ad campaign that tapped into peoples’ emotions. The project did not achieve all of its goals due to inconsistent fundraising, but it laid the groundwork for “No on 8” locally.

Santa Barbara became the only county in Southern California to reject Prop 8. While the state moved nine points towards equality between Prop 22 in 2000 and Prop 8 in 2008, Santa Barbara County shifted a whopping 24 points. There is no question Let California Ring played a role, and the work that groups like EQCA and the Courage Campaign (with its regular Camp Courage) is doing now will eventually repeal Prop 8.