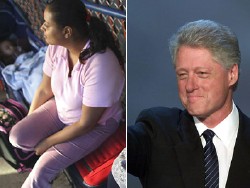 After President Bill Clinton signed legislation in 1996 “ending welfare as we know it,” many highlighted this “common sense” solution and criticized progressives for opposing the bill. Soon after passage, politicians and the media said it had not caused the downsides that activists had predicted, ignoring that the law had not been fully implemented. But troubling reports soon emerged. Jason DeParle wrote a number of pieces in the New York Times about rising homelessness among Milwaukee families denied welfare under the new law. Welfare rolls were down, but the nation had unusually low unemployment, and many leaving the rolls had become homeless. Now, a new report shows that the Clinton welfare law is performing exactly as opponents feared, as the nation’s deep recession allows states to force families off aid and into destitution. It is an American tragedy, largely ignored because the victims are primarily low-income women and their children.

After reading Robert Pear’s April 11 story on how welfare reform is playing out in blue-state Rhode Island, I wondered whether it would echo through the rest of the media. After all, the media had given extraordinarily positive coverage of the “success” of the 1996 law eliminating the federal welfare entitlement, and recall many reporters in the late 1990’s who expressed surprise when I told them I thought the bill would cause great harm to families.

Today, a decade after implementation, the Clinton-Republican “bipartisan” welfare law is a failure. As unemployment has doubled since 2007 and the number of people receiving food stamps has skyrocketed by 40%, the welfare caseload has risen only 10% — a clear indication that the nation’s poorest families are not receiving welfare grants due to the restrictive time limits imposed by the 1996 law.

Ask yourself: if the federal government allowed states to put time limits on food stamps, would those numbers have gone up 40%? Or would we have even more kids on the streets begging for alms?

Families are suffering unnecessarily today because Bill Clinton branded himself a “New Democrat,” vowed to “end welfare as we know it” as part of his 1992 campaign, and then found himself at the start of his 1996 re-election year with not having passed welfare reform.

In the paranoid world of presidential politics, Clinton’s people actually believed that Republican Bob Dole could defeat him that November unless welfare reform was passed. So Clinton, along with every Democratic Senator up for election that year except the late Paul Wellstone, joined with Republicans in enacting a welfare bill that omitted many of the essential safeguards that progressives had insisted be part of any deal.

Safeguards like avoiding lifetime time limits, which were completely unrealistic in light of the nation’s boom and bust economy. Or allowing states to cut or even eliminate benefits as sanctions against families allegedly missing work requirements, regardless of surrounding circumstances.

Liberal supporters pointed to the increased funding for job training, and argued that this was worth the trade-off. Others pointed to the current system not giving recipients sufficient incentive to work (as if the meager grants available prior to 1996 would lead many people to prefer welfare to employment).

Few with experience working with low-income families felt the time limits were anything but a strategy for states to reduce their rolls. And that is precisely what happened.

Welfare reform was said to be a tremendous success in the years following passage, because the economy had jobs for welfare recipients and the lifetime time limits had not kicked in. And thousands of articles and columns written about welfare reform succeeded and why its progressive critics were wrong.

And progressives were not simply criticized for backing the wrong policy. Instead, opponents were identified McGovernite, “big government knows best,” pie-in-the-sky 1960’s throwbacks whose views had brought the Democratic Party nothing but failure in national elections.

But as progressives warned back in 1996, welfare reform could not be measured only by the first few years, or only during economic good times.

As family homeless shelters are overfilled in city after city, as mothers are forced to return to abusive husbands to get money for their kids, and as child poverty has greatly increased since 1996, the law’s failure is clear.

A 35-year Head Start worker in Woonsocket, Rhode Island told Pear, “For the first time, we are seeing significant numbers of families who report no income whatsoever, zero, because they have reached the time limit on cash assistance or have been sanctioned for not meeting work requirements.”

Since 1996, the proportion of children receiving welfare has declined by 50%, while fewer than half of economically eligible families participate in the program.

As progressives predicted, the primary impact of the welfare law has been to deny cash assistance to the nation’s poorest families. This escalation of poverty among the nation’s families is a key part of Bill Clinton’s legacy, ignored as he troops through the third world on missions to help the downtrodden.

The problems of the poor have been eclipsed by the economic downturn for the working and middle class. But while the number of destitute families increase out of sight and out of mind, President Obama and Congress must address this national disgrace.