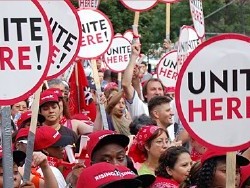 UNITE HERE, best known for its Hotel Workers Rising campaign and successful organizing of the nation’s gaming industry, opens its national convention in Chicago today. When the event was scheduled, it seemed a perfect occasion for celebrating five years of increased union membership in its core jurisdictions, despite tough economic times. Instead, UNITE HERE’s celebration is joined by its now facing competition in its core jurisdictions from SEIU. As UNITE HERE Local 2 President Mike Casey puts it, “SEIU is trying to be the company union in our industries, so we are battling both SEIU and employers.” President Barack Obama has been such a strong backer of UNITE HERE that in 2007 he walked its Congress Hotel picket line and vowed to return after winning the presidency. But SEIU’s attacks on its one-time close ally have undermined labor’s efforts to push a unified platform under its long-awaited pro-union president, weakening the campaign for passing the Employee Free Choice Act (EFCA). The convention should illuminate how other unions view this fight, and whether SEIU will soon find itself not just opposed by UNITE HERE but by much of the labor movement.

UNITE HERE’s first national convention since 2004 comes at a critical time for the future of the nation’s labor movement. Unions will either capitalize on the political opportunities afforded by the most pro-labor President in over forty years, or descend in to warring factions increasingly isolated from the broader progressive movement.

Who Speaks for the American Labor Movement?

I have previously reported on the genesis of SEIU’s attacks on UNITE HERE, and the hotel union’s increasingly successful counter-responses. Now SEIU President Andy Stern has joined with Bruce Raynor and Edgar Romney of his Workers United affiliates in raising the stakes of this fight.

In a widely publicized letter that is also an advertisement covering the entire back page of the Nation magazine, Stern et al. asked “The American Labor Movement” to “join us in this call {to UNITE HERE President John Wilhelm} for binding arbitration on all outstanding issues so this conflict can cease.”

At the time Stern promoted this letter, he knew that Wilhelm had already rejected subjecting his union’s future to binding arbitration. Yet Stern called upon his colleagues in the labor movement to help pressure Wilhelm to change his mind, in effect siding with SEIU against UNITE HERE in the conflict.

Since Stern’s call for allies, the SEIU website only identifies two national labor leaders who hav backed his call: Randi Weingarten of the American Federation of Teachers and Ron Gettelfinger, President, United Auto Workers. None of Stern’s Change to Win allies have publicly backed SEIU.

The Stern-Raynor-Romney letter, followed-up by their June 16 formal arbitration proposal, claimed that Wilhelm and UNITE HERE started the fight against SEIU. In contrast to Wilhelm’s allegedly unprovoked belligerence, Stern and Raynor “engaged in no offensive activities against UNITE HERE.”

Put aside for a moment that the letter overlooks the $500,000 Raynor spent on robocalls, mailing and harassment against UNITE HERE members, and his use of union money for costly investigations into the personal lives of UNITE HERE officers.

What’s most significant about Stern’s letter is that it argues “while to this point we have stood down, if this isn’t resolved by the end of June, we are prepared to respond vigorously to UNITE HERE’s recent hostile actions and defend our union.”

In other words, Stern is saying that if UNITE HERE thought that SEIU was attacking them for months, than that was actually its “stand down” mode — and that all hell could break loose by the end of this week.

As I learned in the considerable time I spent talking to SEIU and UNITE HERE folks in writing Beyond the Fields, John Wilhelm is known to not respond to threats. In fact, UNITE HERE is filled with folks who do not appreciate being told that unless they agree to something, they will be attacked.

So why did Stern and Raynor pursue a public strategy that they knew would be counter-productive? And why did they think this approach would resonate with fellow union leaders?

We will learn in the next few days where the labor movement stands in the dispute between SEIU and UNITE HERE. And since I’m covering the convention in Chicago, look to Beyond Chron for daily updates.